This will be Gambhir's first full-fledged election campaign for the BJP outside Delhi. Earlier, he had campaigned for former hockey player Sandip Singh in Haryana assembly polls last year. His plans for a visit to Jammu and Kashmir during the district development council (DDC) polls in December 2020 did not materialise. 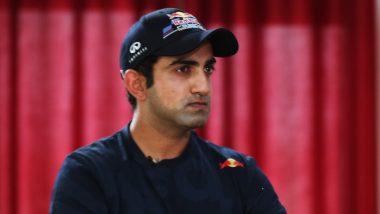 New Delhi, March 7: BJP leader and MP Gautam Gambhir who is likely to join party's campaign in poll-bound West Bengal on Sunday said he always felt at home in the state. The former top order Indian batsman is likely to begin campaigning in West Bengal from March 22. He will campaign in all eight phases of the assembly polls in the state as well as in three phases of the Assam assembly polls, said an aide of the East Delhi MP.

This will be Gambhir's first full-fledged election campaign for the BJP outside Delhi. Earlier, he had campaigned for former hockey player Sandip Singh in Haryana assembly polls last year. His plans for a visit to Jammu and Kashmir during the district development council (DDC) polls in December 2020 did not materialise.

Gambhir said he felt "sad and dejected" over West Bengal Chief Minister Mamata Banerjee's remarks that the BJP was a party of "outsiders" and it had no place in the state. West Bengal Assembly Elections 2021: PM Narendra Modi Addresses Rally at Brigade Parade Ground in Kolkata; Here Are The Key Takeaways.

"Not even for a brief moment was I made to feel that I was an outsider and was not born or brought up in Kolkata or anywhere else in Bengal, that I had not attended Presidency College or Jadavpur University or that I did not have egg rolls from Park Street while growing up.

"I always felt like a part of this huge and happy family which showered me with love and blessings every time I visited the state," the former cricketer said.

Gambhir, under whose captaincy Kolkata Knight Riders (KKR) won two finals of the IPL, has a fan following among the youth of the state where polls for 294 assembly seats will begin on March 27.

The fate of the West Bengal people and the state cannot be decided by bombs and bullets, Gambhir said expressing concern over "incessant and mindless" killings of political workers and violent clashes between parties. Multiple reports of bomb making factories working in overdrive have surfaced in recent times, he said.

"Intimidation, threats and violence have been made new normal by the Left and the Trinamool Congress for decades and it has now become a part of the political culture of Bengal?," he alleged. BJP List of Candidates For West Bengal Assembly Elections 2021: Check 57 Names Announced by Bharatiya Janta Party For Vidhan Sabha Polls.

He said the ruling party is willing to go to any extent to silence any opposition in the state. This is not the ethos of Bengal and the voters in the state must make it clear, the BJP leader said.