In a veiled reference to West Bengal Governor Jagdeep Dhankhar's visit to the national capital during which he met Union ministers, Chief Minister Mamata Banerjee said on Thursday that "a child can also be snubbed and made quiet". 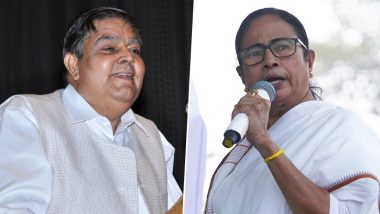 Kolkata, June 17: In a veiled reference to West Bengal Governor Jagdeep Dhankhar's visit to the national capital during which he met Union ministers, Chief Minister Mamata Banerjee said on Thursday that "a child can also be snubbed and made quiet".

Though Banerjee didn't make any direct comment on the issue, she hinted that the state government always wanted a replacement for the present Bengal Governor, with whom the ruling Trinamool Congress has been at loggerheads for some time now.  West Bengal Governor Jagdeep Dhankhar Writes To Mamata Banerjee Over Post Poll Violence, Claims Inaction By State Government Caused Misery

When asked for her comment on the Governor's meeting with the Central ministers, Banerjee said, "You can see everything. I shall not make a comment on this. Words are silver, but silence is gold," adding that "a child can also be snubbed and made quiet".

Banerjee and the state government have been engaged in a war of words with Dhankhar for quite some time over the law and order situation in the state.

When Dhankhar repeatedly said that the state government has been quiet and inactive about the deteriorating law and order situation in Bengal, Banerjee had accused the Governor of overstepping his constitutional limits and interfering in the state's functioning.

Recently, Trinamool MP Mohua Moitra had accused Dhankhar of indulging in nepotism by giving appointments to several OSDs who are close to him.

When asked to comment on the increased expenditure of Raj Bhawan because of the several appointments that are under scanner, Banerjee said, "I know something, but it will not be too nice to say. He (Dhankhar) is saying a lot of things, but that doesn't mean that I will also have to make a comment."

"Remember one thing, the state government has to bear not only the cost of the Raj Bhawan, but there is also another Raj Bhawan in Darjeeling. Then there are expenses of going to Delhi -- the plane fare and other things. We can't help it. It is a constitutional obligation," Banerjee said, adding: "We have written two letters to remove the Governor. I don't want to say anything more on this."

The Chief Minister was critical of the Governor after a letter from the Raj Bhawan on the ‘deteriorating' law and order situation in the state was uploaded on Twitter.

In the letter, Dhankhar had criticised Banerjee for her ‘silence' over the ‘post-poll retributive bloodshed, violation of human rights, outrageous assault on dignity of women and wanton destruction of property'.

Reacting strongly to the letter, the state home department had said in a detailed note, "The government of West Bengal has observed with dismay and distress that the Governor of West Bengal has suddenly made public a letter of his to the Chief Minister, with contents that are not consistent with real facts. The communication format is violative of all the established norms."

(The above story first appeared on LatestLY on Jun 17, 2021 07:53 PM IST. For more news and updates on politics, world, sports, entertainment and lifestyle, log on to our website latestly.com).