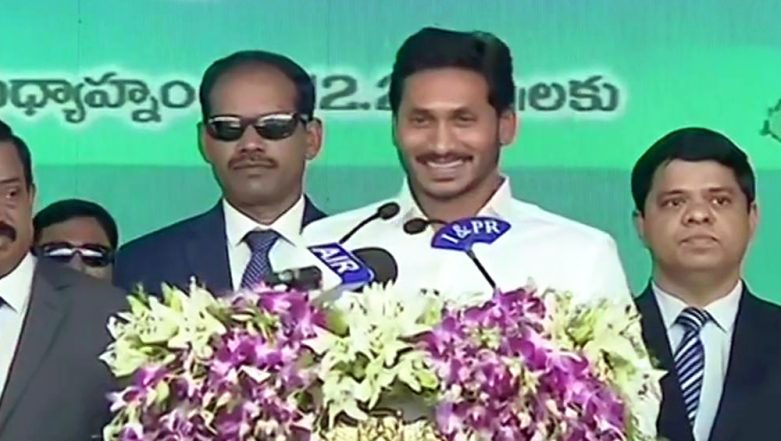 Vijayawada, May 30: YSR Congress Party chief Jagan Mohan Reddy took oath as the chief minister of Andhra Pradesh on Thursday, May 30, exactly a week after the landslide victory in assembly and Lok Sabha elections in the state. Reddy was administered the oath of office and secrecy by Governor ESL Narasimhan at a grand function at the Indira Gandhi Municipal Stadium in Vijayawada. Watch Telecast of YSRCP Supremo Taking Oath as Andhra Pradesh Chief Minister.

The key guest at the oath-taking ceremony were Dravida Munnetra Kazhagam (DMK) supremo MK Stalin and Telangana Chief Minister K Chandrasekhar Rao. The 48-year-old leader had also extended invitation to outgoing CM N Chandrababu Naidu, however, he refused to attend the event and sent a delegation of leaders at Reddy's residence to congratulate him. Chandrababu Naidu to Skip Jagan Mohan Reddy's Swearing-in.

Who is Jagan Mohan Reddy?

Jagan Mohan Reddy is the founder of YSR Congress Party and was the leader of opposition in Andhra Pradesh Legislative Assembly from May 2014 until May 2019. He is the son of ex- Andhra Chief Minister Y. S. Rajasekhara Reddy. He started his political career by campaigning for Congress in 2004 elections and in 2009 elections he was elected to Lok Sabha from Kadapa constituency as a member of Congress.

In the 2019 elections, Yuvajana Sramika Raithu Congress Party won 151 of the 175 seats in the state Assembly, decimating the Telugu Desam Party headed by Naidu, who became the first CM of the state after it was bifurcated to carve out Telangana five years ago. In the Lok Sabha elections, YSRCP won 22 of the 25 parliamentary seats.