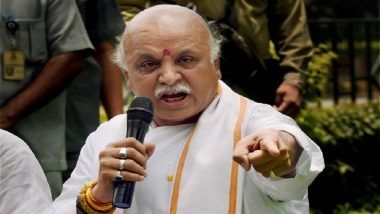 Gurgaon, April 14: Pravin Togadia, who has been with the VHP for over three decades, today announced quitting the outfit and said he would go on an indefinite fast from Tuesday to push the Hindutva cause.

The veteran leader, who served as the VHP international working president since December 2011, announced his decision in a press conference after his nominee to the post of international president of the VHP was defeated in voting, held for the first time in over five decades.

"I am not in the VHP anymore. I was in it for 32 years. For the welfare of Hindus, I left my home and my lucrative medical practice. I will continue to work for the welfare of Hindus. Hindus first is the mission of my life and from Tuesday, I will go on an indefinite fast in Ahmedabad for fulfilling the longstanding demands of Hindus," he said.

Kokje got 131 votes and defeated incumbent Raghava Reddy who mustered 60 votes. 192 delegates of the Vishva Hindu Parishad (VHP) were eligible to vote in today's election in Gurgaon.

Togadia, who batted for Redyy, however, alleged irregularities in the exercise.

Togadia has off-late been critical of Prime Minister Narendra Modi and the BJP leadership.