When COVID-19 swept through New York City, restaurants were one of the most badly hit sectors. A lot of business owners struggled during the lockdown, but they pressed on in order to provide food for quarantined families and survive as a business as well. 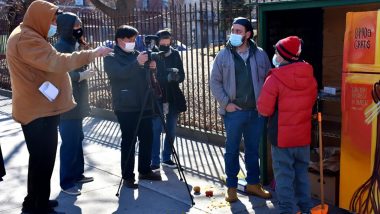 When COVID-19 swept through New York City, restaurants were one of the most badly hit sectors. A lot of business owners struggled during the lockdown, but they pressed on in order to provide food for quarantined families and survive as a business as well. COVID Ditty, created by actor, writer, and director Steve Greenstein, is a from the heart dramedy series about life in Kingsbridge, a working class neighbourhood in the Bronx, NYC. It sheds light on the day-to-day struggles of local business owners in New York while also giving jobs to actors and film crew members affected by the health crisis.

COVID Ditty is now beginning production on its seventh episode. Greenstein plans to continue to do his part hiring actors and production people as a way to help others during one of the greatest stories of our time. Told through the voice of various diverse characters, including a single father and his son who grow closer during these hard times, a latina nurse’s aid on the front line caring for patients, and a chinese restaurant owner facing discrimination. The nine-minute premiere episode, What's Essential, opened with the nightly sounds of community members banging on pots and pans as a tribute to front-line workers last year while the whole of New York was in lockdown. Episode 2 is titled “Sal's Deli,” “Me and Mr. Lee” for episode 3, “Oh, Danny Boy” for episode 4, “Spuyten Duyvil” for episode 5, and “The Icon” for episode 6.

Greenstein’s unfolding episodes capture oddities and ironies that we have all been forced to accept. According to Greenstein, “We live in a move-on culture. People don’t want to grieve. COVID-19 is the big reset.” By the seventh episode, the father asks his son about society’s shift to materialism: “The stock market is up. Have we learned anything? Be kind to one another.”

"We are creating a web series during the pandemic that helps the community," Steve Greenstein explained. "We are employing SAG AFTRA actors who have been out of work. Production costs go right back into the community, every meal on our Bronx set is bought from a local restaurant. We are giving voice to the working people of NY who have served on the front lines during the pandemic."

Steve Greenstein is looking forward to collaborating with some of the country's biggest streaming platforms in the future to create awareness on the plight of many individuals affected by the pandemic in the Bronx. He hopes to reach a larger audience by joining forces with one of these streaming services. His distinct work on COVID Ditty is a real-life testament to the resilience of the human spirit, the value of uniting as a community, and the beauty of taking initiatives to improve peoples' way of life.

Greenstein's collaboration with artists, from camera operators to actors, have brought the show to life. Greenstein himself used a portion of his retirement savings to give jobs to his fellow artists who were also badly hit by the pandemic. This selfless act of giving a rare opportunity for people to earn in one of the most difficult times in history is a testament to Steve’s deep concern for people in the film and theatre  industry. He firmly believes that one of the surest ways to survive the pandemic as a community is to show genuine care for each others' situations. Recently, Covid Ditty won Best Webseries in the prestigious Best Shorts Competition in California, as well as Best Webseries in the Boston Independent Film Awards.