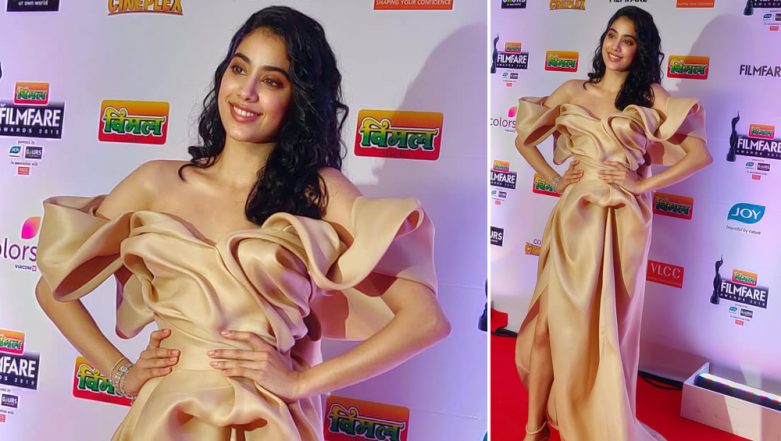 The much-awaited award nite - 64th Vimal Filmfare Awards 2019, is happening tonight at the Jio Garden in Mumbai. It is an event where we'll get to see some of the leading celebrities of tinsel town under one roof, and one among them who has caught our attention is Janhvi Kapoor. The young diva has arrived for the event and we must say, her glamorous avatar will leave you awe-struck. Filmfare Awards 2019: Janhvi Kapoor Rehearses for Performance on Deepika Padukone’s Ghoomae and Nora Fatehi’s Kamariya – Watch Videos.

We have seen Janhvi Kapoor attending Filmfare Awards along with her parents in the past. But this is the first time ever we'll be getting to watch her perform as well! She'll be setting the stage on fire with none other than Shah Rukh Khan. Yes, Sridevi and Boney Kapoor's daughter is performing with the King of Hearts. About it she said, "I am so excited...we rehearsaled a bit yesterday. I'm just really excited, I can't control my excitement."

Ain't she looking pretty? Talking about the show's host - Shah Rukh Khan, Ranveer Singh are all set to win our hearts with their charming act. Other than Janhvi Kapoor, the celebs who will set the stage on fire with their kick-ass performamces include Vicky Kaushal, Kriti Sanon, Rajkummar Rao, and of course SRK and Ranveer. There would be many more performances happening tonight and we just can't wait to know, who all would be walking away home with the beautiful trophy! Stay tuned for all the updates on the 64th Vimal Filmfare Awards.