Who do you think looks the best – Sonam Kapoor, Aishwarya Rai Bachchan, Anushka Sharma, Bipasha Basu and Geeta Basra or someone else? 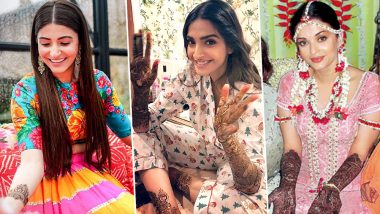 Mehndi is an important function in Indian weddings. Be it Hindu or Muslim marriages, mehandi kicks off the festivities in the country. Recently, actress Sonam Kapoor’s mehndi function took place on May 6 and fans cannot help admiring how beautiful the bride-to-be looked in the pictures. With fiancé Anand Ahuja by her side along with entire Kapoor khandan, the Veere Di Wedding star had a blast at the soirée ahead of her wedding on May 8 to be held in Mumbai. Sonam Kapoor and Anand Ahuja were twining in pink for the mehndi function. Opting to go easy on embellishment and bright makeup, Sonam’s simple yet classy look including the one in comfy PJs joins the list of memorable Mehandi moments of Bollywood actresses like Anushka Sharma, Aishwarya Rai Bachchan and Bipasha Basu. 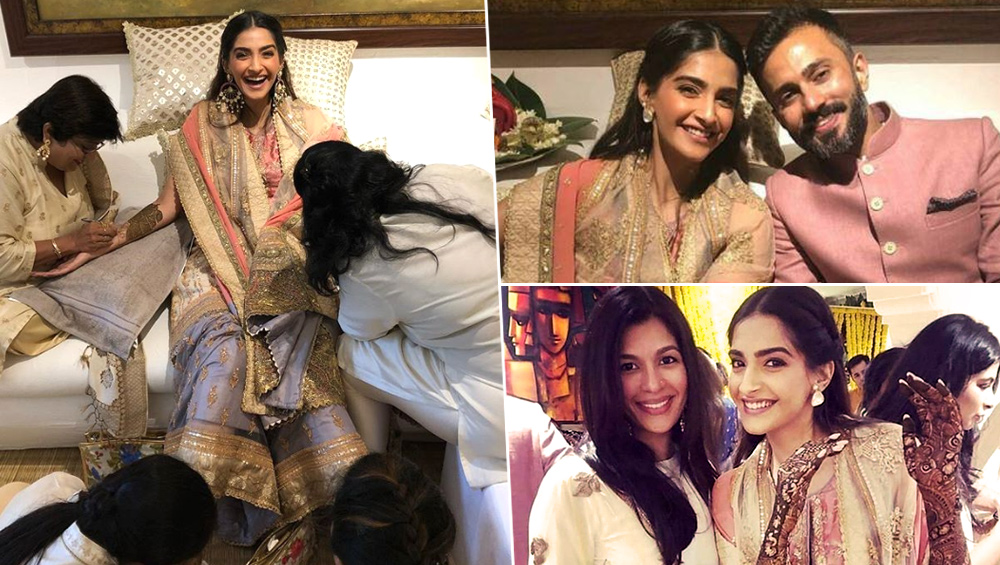 Sonam Kapoor chose a beige-pink-lilac sharara suit as women applied the beautiful mehandi design on her hands and legs. She wore huge statement earrings, and that’s all for jewellery. Her middle-part hairstyle added more to the innocence exhibited by Sonam who was all smiles and laughs at the Mehandi function with Anand. But the most adored moment from the celebrations was when Sonam flaunted her mehandi in a pair of comfortable PJs. She also added a story on Snapchat revealing what she wore under her stylish outfit – a pair of flipflop! Yes, that’s Sonam Kapoor, our contemporary chic bride. 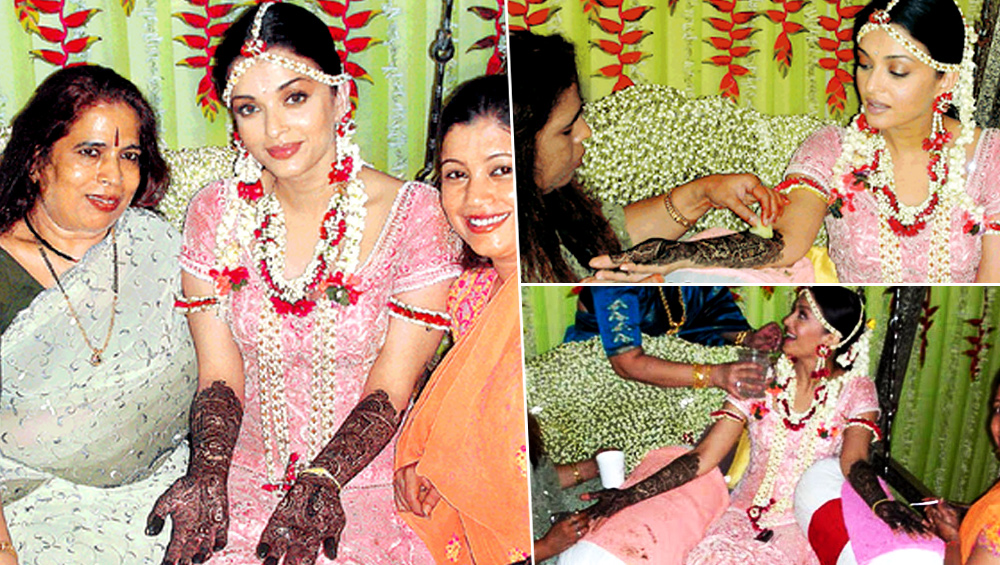 Let’s admit, the whole craze for celebrity weddings began with Abhi-Ash marriage in 2007. The couple got married on April 20 following a long list of functions. For the mehandi ceremony, Aishwarya wore a pink lehenga, which she teamed up with white and red floral pattern jewellery. A look at former beauty queen’s radiant face from the function and you would know why Aishwarya Rai Bachchan is touted to be world’s most beautiful woman. She truly epitomises beauty, elegance and grace. 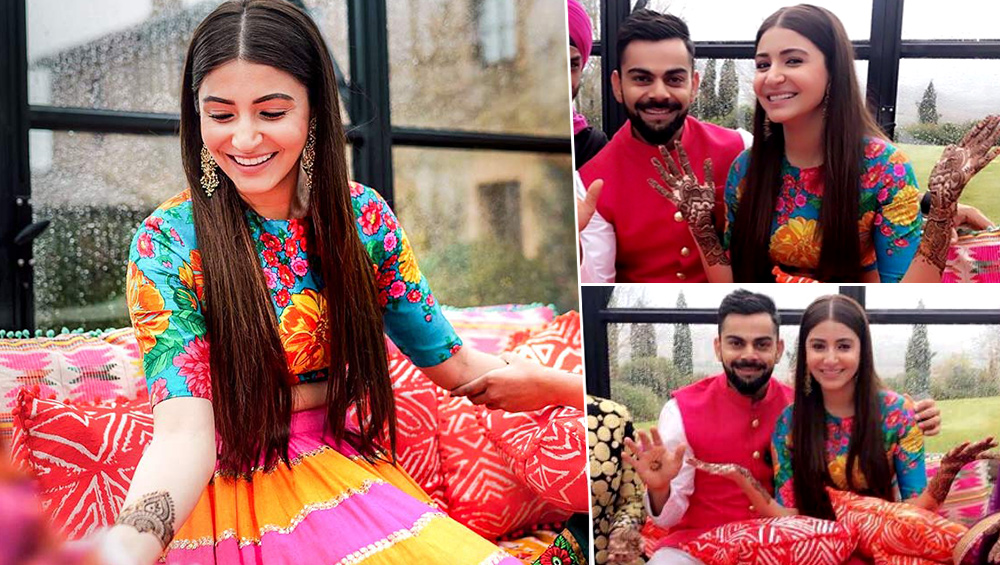 Anushka Sharma married Indian cricket captain Virat Kohli in secret but extravagant wedding in Tuscany, Italy on December 11, 2017. But before the D-Day, the diva had a special mehandi function that saw her dress up in a colourful lehenga with crop top by fashion designer Sabyasachi. It was a graphic lehenga in fuchsia pink and Indian orange that was hand-printed by the famed Calcutta block printers and hand-embroidered with gota and marori. She wore earrings from the Sabyasachi Heritage Jewelry collection with custom juttis to complete the look. The groom was present for the function adding charm to the mehandi function. 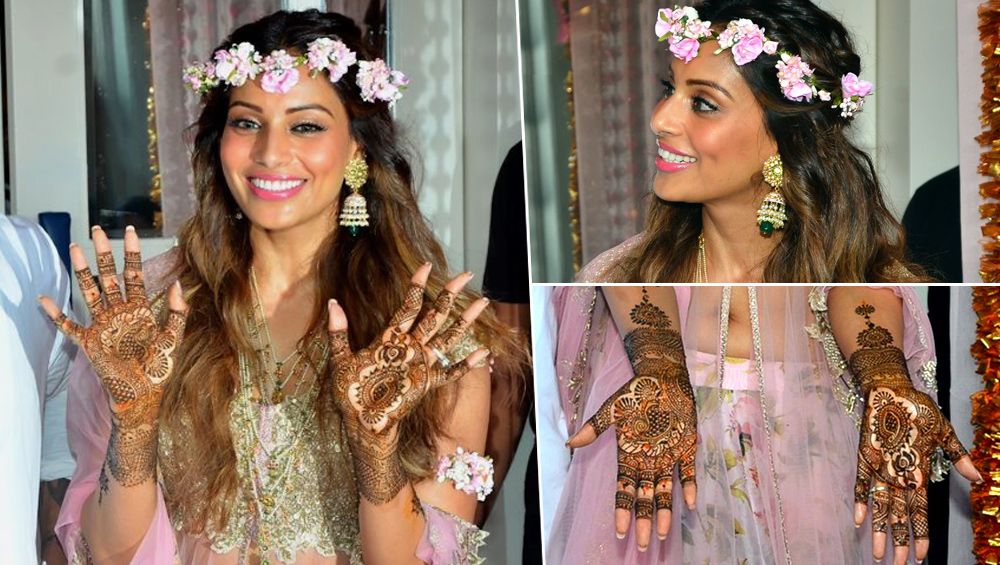 Bipasha Basu married Karan Singh Grover in a grand ‘monkey love’ wedding on April 30, 2016. The much-in-love couple had an elaborate wedding including pre-wedding photoshoot, mehandi and sangeet and traditional Bengali wedding. For mehandi, Bipasha chose a pink lehenga that she accessorised with floral pattern jewellery. While Karan wore a white kurta pajama in contrast to his wife’s pink outfit as they posed for numerous photos. 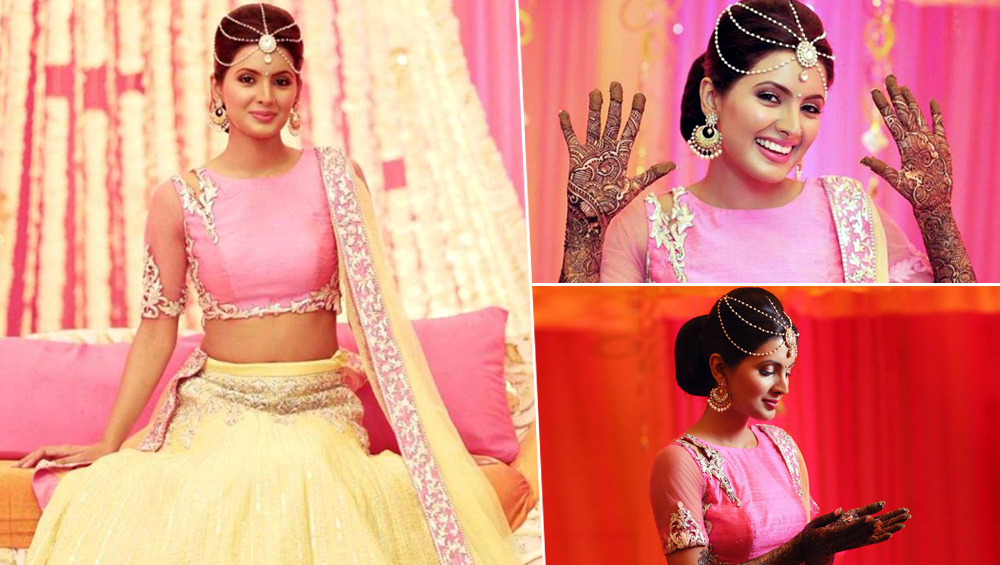 So, these were some of our favourite brides’ looks from their mehandi functions. Who do you think looks the best – Sonam Kapoor, Aishwarya Rai Bachchan, Anushka Sharma, Bipasha Basu and Geeta Basra or someone else? As for us, we loved all of them!

(The above story first appeared on LatestLY on May 07, 2018 04:36 PM IST. For more news and updates on politics, world, sports, entertainment and lifestyle, log on to our website latestly.com).