Ezra Miller Walks in a Shiny Puffer Coat at the Red-Carpet Event of Fantastic Beasts Premiere in Paris, See Pics 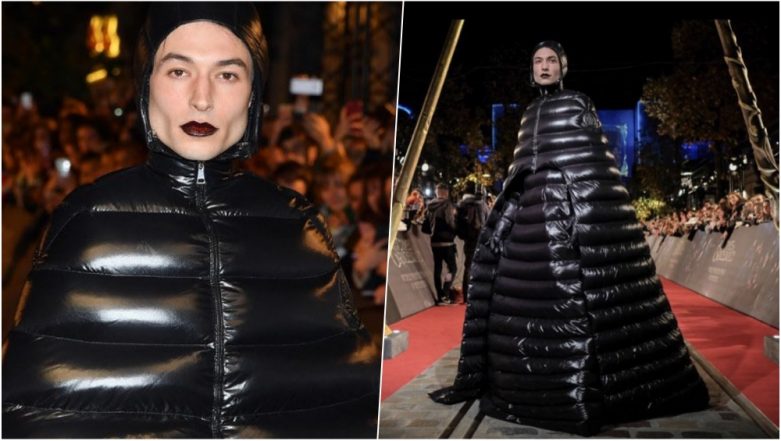 At the premiere event of Fantastic Beasts: The Crimes of Grindelwald held in Paris, Ezra Miller stunned everyone with his red carpet look on Thursday evening. While other men would feel restricted in a tux and a bow tie, Miller knows how to redefine fashion for men. Ezra is also the first actor who identifies as ‘queer’ to carry a superhero movie in Warner Bros.’ upcoming Flash film in 2020. Ezra stood out in a look that not many can any pull off. Miller wore a shiny floor-length puffer jacket. Fantastic Beasts The Crimes of Grindelwald's First Reactions Are Out! Harry Potter Spinoff Gets High Praise From Early Screening - Read Tweets.

Ezra’s shiny garment comes from Valentino creative director Pierpaolo Piccioli’s recent collaboration with Italian sportswear label Moncler as part of their new Geniuses program. The oversized puffer coat look was completed with gloves, a hood and a bold burgundy lip with highly-contoured cheek bones. In his recent interview with The Hollywood Reporter, the actor spoke about his own #MeToo story which happened when he was underage. Priyanka Chopra is Ready to Run the World in Black Puffy Jacket, Which Not Everyone Can Pull Off (See Pics).

Only ezra Miller could pull THIS off pic.twitter.com/ImnpVfApRN

Ezra Miller has my heart pic.twitter.com/0wf4XrJ0JW

Ezra Miller is a rare and fascinating creature pic.twitter.com/hxlTlRD9Wb

In his recent interview, Miller said, “I don’t identify as a man. I don’t identify as a woman. I barely identify as a human.” In the Fantastic Beasts sequel, Miller plays an American wizard Credence Barebone. The movie will be released on November 16. Miller has become known for his gender-bending fashion choices and recently broke the internet with his cover story for GQ Style with his unique style on full display.