Fashion Faceoff: Kiara Advani or Malaika Arora, Whose Tangerine Pantsuit Will You Pick? 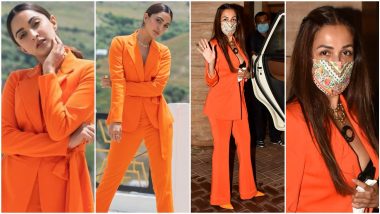 While Diet Sabya feels Kiara Advani deserves a better stylist, we would beg to differ this time. The Shershaah actress who was earlier at Kargil for the trailer launch of her next was also seen interacting with a handful of journalists. The girl ditched anything modish for her appearance and settled for a formal but playful orange playsuit instead. The outfit looked vibrant on the actress and she certainly nailed it really well. Styled by Eka Lakhani, the girl was able to exude some power while also charming her way into our hearts. Fashion Faceoff: Hina Khan or Mira Rajput, Whose Royal Purple Lehenga Has Your Vote?

Kiara's orange pantsuit belonged to the house of Sonaakshi Raaj. She had styled her outfit with a delicate choker and hair tied in a sleek ponytail. With blushed cheeks, nude lips and well-defined brows, she emphasised the importance of minimal makeup and why it has a lasting impact. And for those who think if orange is a new colour to witness in pantsuits, well, it certainly, is not.

Earlier, we had diva, Malaika Arora stepping out for a gala gathering in a similar orange pantsuit and boy, she looked hot as hell! While Kiara played it safe, Malaika added an extra oomph to it by pairing it with a bralette instead. She had a statement necklace to go with her attire and the rest of her look was also pretty simple.  Fashion Faceoff: Alia Bhatt or Taapsee Pannu, Who Nailed this Red Picchika Saree Better?

For those, who like to believe, orange is the new black, should certainly eye these pieces. And while we are having a tough time, who do you think pulled off this colour better? If given a choice, will you like to play it safe like Kiara or make a rather bold impression like Ms Arora? Drop-in your comments on Twitter or vote for the desired option below.

Kiara Advani or Malaika Arora - Whose Tangerine Pantsuit Will You Pick?

(The above story first appeared on LatestLY on Jul 29, 2021 11:00 AM IST. For more news and updates on politics, world, sports, entertainment and lifestyle, log on to our website latestly.com).