Ileana D'Cruz has posted yet another pic on her Instagram and she is a sight to behold. Seems like the actress is on a holiday, as she is chilling by soaking in the sun in the snap. It is oxymorons like these that make life more beautiful. 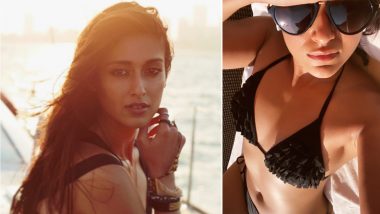 Ileana D'Cruz has posted yet another pic on her Instagram and she is a sight to behold. Seems like the actress is on a holiday, as she is chilling by soaking in the sun in the snap. It is oxymorons like these that make life more beautiful. She's wearing a black bikini in the pic, and chose a top angle to click it. Not many would choose this angle, as it can easily be unflattering. But with those puckered lips and a toned body, that she's worked hard to maintain, Ileana was least bothered about the risky angle. She pulls it off with ease. Ileana D’Cruz Birthday: Here’s A Look At The Hottest Instagram Pics Of The Actress As She Turns 33!

Ileana's caption says that she's spending some with her family while thinking about the beach. She also takes the help of a hashtag to clarify that she might not look like that she's happy but she is. "Mentally on the beach but actually in the middle of glorious much-needed family time #imhappyijustdontlookit," she wrote. Ileana D'Cruz Pens a Powerful Post on Body Positivity, Questions Why She Tried to Fit In When She Was Meant to Stand Out.

While you marvel at her fit body, also remember her post where she talked about body positivity. "I’ve always worried about how I looked. I’ve worried my hips are too wide, my thighs too wobbly, my waist not narrow enough, my tummy not flat enough, my boobs not big enough, my butt too big, my arms too jiggly, nose not straight enough, lips not full enough..... I’ve worried that I’m not tall enough, not pretty enough, not funny enough, not smart enough, not “perfect” enough," read a part of her lengthy post. The Barfi actress later continued saying, "Not realising I was never meant to be perfect. I was meant to be beautifully flawed. Different. Quirky. Unique. Every scar, every bump, every “flaw” just made me, me. My own kind of beautiful. That’s why I’ve stopped. Stopped trying to conform to the world’s ideals of what’s meant to be beautiful. I’ve stopped trying so hard to fit in. Why should I?? When I was born to stand out."

On the work front, Ileana recently wrapped up the shooting for her next film, Unfair and Lovely. She shot for the film amid a pandemic in Haryana. The movie stars Randeep Hooda as the make lead. The film will talk about the beauty standards set by the colour of the skin. The actress also stars in The Big Bull with Abhishek Bachchan.

(The above story first appeared on LatestLY on Dec 01, 2020 12:26 AM IST. For more news and updates on politics, world, sports, entertainment and lifestyle, log on to our website latestly.com).