Irina Shayk has taken to her Instagram handle to share a few sizzling mirror selfies of her. She is looking extremely hot in all the pictures as she can be seen wearing a sexy black thong bikini. 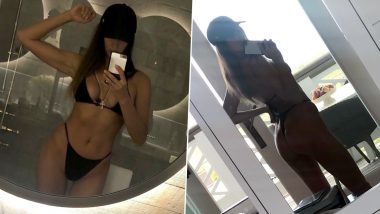 Russian model Irina Shayk is undoubtedly a stunner.  She literally sets the temperature soaring with her hot pictures. Irina is one of the most sought-after models turned actresses in the world. She enjoys a massive fan following on social media, the diva has over 15 million followers on Instagram. Now, yet again the 35-year-old supermodel has turned up the heat on Instagram with her latest post. In the latest pictures, Irina can be seen wearing a skimpy black thong bikini and she is looking extremely hot in the same.

She has posted the pictures a day after several reports of her alleged relationship with Kanya West was doing rounds on the internet. Looking at the pictures of Irina, it seems like she has gone for a vacation over the Memorial Day weekend. For all the stunning pictures, Irina has utilized a bathroom mirror. And in the hot mirror selfies, she can be seen flaunting her perfect curves, toned midriff, and beautiful legs. She has accessorized her look with a black baseball cap and a cross pendant. In one of the pictures, she can be also seen flaunting her bum. While sharing the same, she captioned it as, "Ima not good at d captionsss."

Soon after she posted the pictures, several started pouring in comments on the same. Several commented about her hotness while a few trolled her alleged relationship with Kanye West. One user wrote, “How's mister west” while another wrote, “Kanye clapping them lil cheeks.”

Well, both of them are single now, and thus, there’s a possibility of romance between them but none of them have confirmed it yet.

In February, Kanye West and his ex-wife Kim Kardashian got divorced. On the other hand, Irina Shayk and Bradley Cooper parted ways in 2019. They have e a four-year-old daughter, Lea de Seine. The duo started dating in 2015 and was in a four-year-long relationship.

(The above story first appeared on LatestLY on May 29, 2021 01:23 PM IST. For more news and updates on politics, world, sports, entertainment and lifestyle, log on to our website latestly.com).