Rhea Kapoor Birthday: Perennially Fashion Forward, She is a Lady With a Fine Taste (View Pics)

While Rhea Kapoor was behind sister Sonam's dramatic and bold looks all these years, there were times when she faced the cameras and left a lasting impression on our minds. 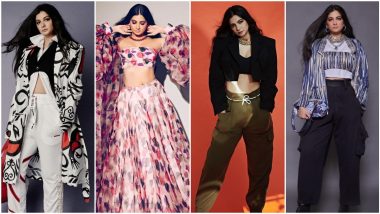 Anil Kapoor's darling daughter and a successful film producer in herself, Rhea Kapoor celebrates her birthday on March 5. While Rhea chose to stay away from the acting industry unlike her siblings, she eventually became a part of it. After being Sonam Kapoor's go-to stylist for so many years, she ventured into film production and delivered her first hit in Veere Di Wedding. The success even prompted her to plan its sequel and that's coming our way very soon. But Rhea's production ventures isn't our hot topic of discussion. Rhea Kapoor Shares a Beautiful Unseen Picture With Father Anil Kapoor From Her Wedding Day on His 65th Birthday!

Today, we'd like to highlight the fashionista that she is and how couture probably runs in her blood. While the Kapoor girl was behind Sonam's dramatic and bold looks all these years, there were times when she faced the cameras and left a lasting impression on our minds. Rhea has a great taste in fashion and her love for couture cannot be even. While she isn't into dramatic attires, she likes keeping it chic and extremely elegant. Rhea had earlier collaborated with Masaba Gupta for one of her collections and we were instantly in love with it. The girl has a mind of a designer and the persona of a muse and together, she's a lethal combination to match. Kareena Kapoor Khan’s WhatsApp Conversation With BFF Rhea Kapoor Is Sweetness Overloaded (View Post).

To elaborate on this in detail, we pick some of her best sartorial attempts from recent times. Let's have a quick look below.

One From Her Wedding Trousseau

Never Say No to Red

If This Doesn't Excite You, We Don't Know What Will

Coming to her personal life, Rhea married her fiance, Karan Boolani in 2021 and their wedding was an extremely intimate affair. The entire Kapoor family was obviously a part of their special day and the pictures of which were all over the internet. Speaking of pictures, we hope Rhea shares some clicks from her birthday celebration today. On that note, here's wishing her an eventful year ahead.

(The above story first appeared on LatestLY on Mar 05, 2022 09:00 AM IST. For more news and updates on politics, world, sports, entertainment and lifestyle, log on to our website latestly.com).