Shilpa Shetty Stuns in an Embellished Sharara for Eid Al-Fitr Worth Rs. 43,500! 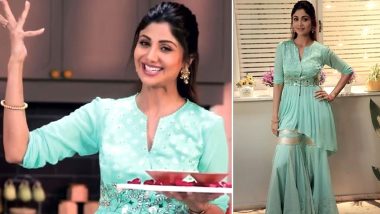 Shilpa Shetty is a sartorial stunner! Well, for starters as the mother of two, the defies age, is a regular on the fashion charts and plays muse to some of the trickiest hues and designs by eminent designers. Her Yoga-toned svelte frame adapts any style with equal elan but Shilpa ups the ante with a stunning beauty game in tow. When she isn’t being all fit and healthy, Shilpa Shetty indulges in all things fabulous and dishes out the most amazing recipes. Getting into the festive mood of Eid Al-Fitr, Shilpa took to flaunting the ubiquitous sharara for shooting the latest episode of her cooking series. Needless to say, she allowed the ensemble to take centre stage by keeping the makeup and hair game to a bare minimum.

A three-piece suit featuring a kurta, pants and dupatta, the sharara adorned with intricate embroideries, stone, sequins, beads work along with other ornamentations has quickly become a must-have wardrobe festive staple in recent times. With established and upcoming designers giving this traditional ensemble a worthy update with every fashion season, the sharara suits are common attire for women across the globe usually worn at ceremonial occasions such as weddings and festivals. Here's a closer look at Shilpa's style vibe. Shilpa Shetty, the Neo Ethnic Chic Muse of Anamika Khanna!

Shilpa stuns in an aqua kurta in a gajji and georgette base embellished with sequins, beads, layered champagne gota patti, coloured resham and zari embroidery that was paired with matching sharara. The ensemble worth Rs. 43,500 was teamed with a half updo, subtle glam and defined kohl-rimmed eyes. Fashion Face-Off: Shilpa Shetty or Amruta Khanvilkar in Zara? Who Pulled the Dramatic Ensemble Better? 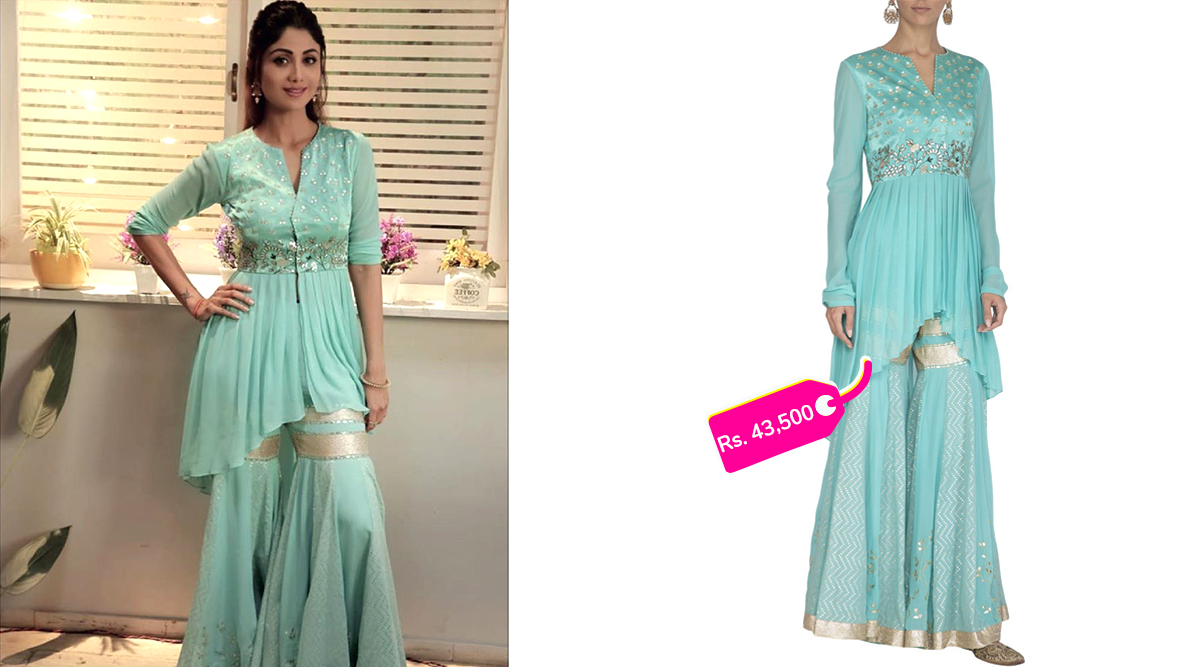 On the professional front, Shilpa was seen playing Cupid on the web series, Hear Me Love Me on Amazon Prime. She also was seen as a celebrity judge on the children’s dance reality show, Super Dancer Chapter 3 along with Geeta Kapoor and Anurag Basu. She will be seen in Nikamma, a romantic comedy action film directed by Sabbir Khan also featuring Abhimanyu Dassani and Shirley Setia in the lead roles. It was scheduled for a release in 2020.

(The above story first appeared on LatestLY on Jun 01, 2020 08:05 PM IST. For more news and updates on politics, world, sports, entertainment and lifestyle, log on to our website latestly.com).