Sonam Kapoor took to her social media handle to share a few gorgeous pictures of her. In the stills, the stylish diva can be seen exuding boss lady vibes in a black skirt suit. 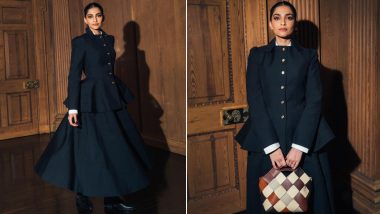 Sonam Kapoor Ahuja is considered to be one of the most fashionable actors in Bollywood. Whatever she wears, it instantly becomes a fashion statement. She is the muse for several ace fashion designers. Even the paparazzi cannot get enough of her whenever she steps out in the city.  Be it with her airport look or red carpet look, the Delhi 6 actress always makes sure to turn millions of heads. Undoubtedly, Sonam is a true blue fashionista. When it comes to style and fashion, nobody can beat the 35-year-old gorgeous actress.

Recently, Sonam took to her social media handle to share a few stunning pictures of her from a photoshoot. In the pictures, the actress can be seen flaunting power dressing in an edgy black skirt suit which includes a flared maxi skirt and buttoned shirt with peplum waist. To style her look, she has opted for a pair of black leather boots and tied her beautiful black tresses neatly into a bun. To glam up her look, Sonam wore minimal glowy makeup with contrasting red lipstick. And to accessorise her attire she can be seen holding a stylish handbag from Loewe. She simply captioned the post with a black moon emoji. Soon several started pouring in heart emojis on her post. While one user wrote, “Sonam didi you are just flawless fashionista ever,” while another one wrote, “Can’t describe this beauty in words.”

Earlier, the Bollywood actor had stepped out to attend a musical by British Indian sitar player Anoushka Shankar and later, she had shared another beautiful picture of her on Instagram from the event. In the pictures, Sonam can be seen wearing a white voluminous cotton Khadi top and she is looking extremely pretty in the same. Take a look:

Let us know in the comment section which dresses of Sonam Kapoor you liked the most. Now, on the work front, Sonam Kapoor will be next seen in Shome Makhija's action thriller Blind.

(The above story first appeared on LatestLY on Jun 03, 2021 06:55 PM IST. For more news and updates on politics, world, sports, entertainment and lifestyle, log on to our website latestly.com).