Seeing her in a desi avatar is refreshing and we think Sunny is absolutely nailing this look. The gorgeous background and Sunny's sexy poses made the photoshoot come out beautifully. 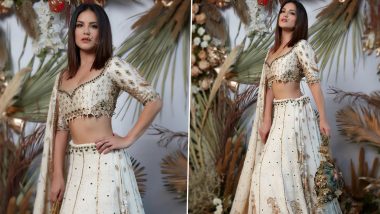 It's always sunny when Sunny Leone posts pictures on her Instagram. The actress who returned to India after the lockdown has been busy with work ever since her arrival but she makes sure keeps her fans engaged on social media. The actress has done various photoshoots in the past few weeks and has everyone talking about her amazing fashion skills. She recently had posted a series of pictures in a yellow bikini and fans went gaga over Sunny's hot photos. The actress has now posted a few pictures in a desi avatar and is raising the temperature and how. Sunny Leone Calls Cheating Charge ‘Slanderous’ and ‘Deeply Hurtful’.

Sunny posed wearing an off-white lehenga that looked absolutely stunning on her. The blouse had a plunging neckline and the hem of the blouse was decorated with tassels. The blouse has a golden embroidered work on it as well. The lehenga also has similar work on it. The outfit is embellished with tassels and sequin, giving it a really regal look. Sunny added a similar-looking dupatta to complete the look.

Talking about her makeup, the actress opted for neutral tones. A nude lipstick, highlighter, eyeshadow, brushed brows and tint finished her look. Sunny added a gorgeous looking nose ring and a statement potli to go with her look. Seeing her in a desi avatar is refreshing and we think Sunny is absolutely nailing this look. The gorgeous background and Sunny's sexy poses made the photoshoot come out beautifully.

Check Out Her Photos Here:

Earlier, a 38-year-old man, Piyush Sen, was arrested by the Versova police for using a car number for his Mercedes that was already registered in the name of Sunny Leone's husband Daniel Weber. Reportedly, the police had taken the accused in a custody for a day on Wednesday. In September 2020, the actress' husband Daniel had received a few e-challans for not adhering to road safety rules which were actually committed by Sen, confirmed a police officer. Anamika: Sunny Leone Begins Filming for Vikram Bhatt’s Action-Packed Web Show in Mumbai.

Workwise, Sunny is currently in Kerala shooting for the latest season of MTV reality show Splitsvilla. She was last seen Sunny Leone was last seen on web series Bullets which released on MXPlayer on January 8 starred Karishma Tanna alongside her. Last month, she kickstarted the first schedule of her first fictional web show Anamika as well. The series is said to be a 'gun-fu' action thriller directed by Vikram Bhatt.

(The above story first appeared on LatestLY on Feb 28, 2021 06:26 PM IST. For more news and updates on politics, world, sports, entertainment and lifestyle, log on to our website latestly.com).