Vanessa Hudgens celebrates her birthday on December 14 and as the Disney star turns 31, we look at some of her best looks ranging from red carpet appearances to film promotions. Check out the pictures inside. 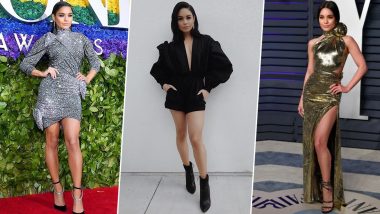 You probably still remember Vanessa Hudgens as the cutesy Gabriella from Disney's High School Musical. While Hudgens shot to fame with this movie, she later went on to star in several other projects including Journey 2: The Mysterious Island, Spring Breakers, The Princess Switch among others. Ever since her Disney days, Hudgens has boasted of a huge fan following and soon also became a style sensation thanks to her amazing style outings from film promotions to her red carpet appearances. Vanessa Hudgens in All Black for the Weedmaps Museum of Weed Exclusive Preview Celebration.

In fact if you happen to visit Hudgens' Instagram profile right now, you will realise how fashionable the actress is. Recently seen in Netflix's The Princess Switch

Vanessa Hudgens sure knows how to make heads turn. Not long ago, the actress attended a Harper's Bazaar bash where she was seen wearing an embellished sheer dress by Ralph and Russo. The see-through dress had Hudgens flaunting her low-cut underwear. Paired with a perfect pair of stilettos, Vanessa certainly made it to the best-dressed list of the bash.

2. When Vanessa Hudgens Stole the Show at Tony Awards 2019

WHAT AN AMAZING NIGHT!!!!! Had the most incredible time. Thank you @altuzarra for taking me and dressing me head to toe 🥰🥰🥰 also, happy pride month!!! This carpet was everything 🌈 #tonyawards2019

Vaness Hudgens does know how to make the perfect red carpet appearance and she definitely managed to turn up in one of her best at Tony Awards 2019. The actress was seen sporting a green-blue mini dress designed by Altuzarra. With a wet-haired look, Vanessa was giving even more stylish vibes. She clubbed the shiny dress with black heels and we think it was a total winner.

As we said, Vanessa is probably the queen of red carpets. The actress had served another sensational look at the Vanity Fair Oscars Party this year and we still haven't gotten over it. Hudgens turned up in a Gold halter gown with a thigh-high slit by Dundas and [aired it with an excellent pair of Rene Caovilla sandals. The Disney star looked gorgeous and was all smiles as she posed with boyfriend Austin Butler. Yo or Hell No! Vanessa Hudgens’ Floral Yellow Beaumont Mini Dress for Her Italian Getaway.

We are here to tell you that Hudgens is not only great when it comes to red carpet looks but has also been full of surprises when it comes to her film promotions. While promoting her film Second Act which starred Jennifer Lopez in lead, the actress decided to suit up in a black romper with a plunging neckline. The romper/playsuit with its dramatic sleeves made for an amazing look. We loved how she chose to go for gold earrings with this. Find us a better film promotions look.. we'll wait!

5. Vanessa Hudgens Slaying it Like a Queen at Once Upon A Time In Hollywood Premiere

Vanessa Hudgens didn't star in Quentin Tarantino's film but she sure made to become the highlight of the film's premiere. The actress turned up in a black Giorgio Armani gown with sheer panels and looked like a total diva. Hudgens was at the premiere to support her boyfriend Austin Butler who starred in the Leonardo DiCaprio film. Hudgens was one of the best-dressed celebs at the premiere.

Looking at these amazing looks, we are absolutely certain that Hudgens can pull off anything and everything. She has a great sense of style and we love how she never misses out on being the best-dressed at most events. We hope the actress continues to slay it with her style and keeps giving us some serious fashion goals.

(The above story first appeared on LatestLY on Dec 14, 2019 10:00 AM IST. For more news and updates on politics, world, sports, entertainment and lifestyle, log on to our website latestly.com).