The fast is kept by women who have difficulties in conceiving, have had miscarriage or desire a boy child. 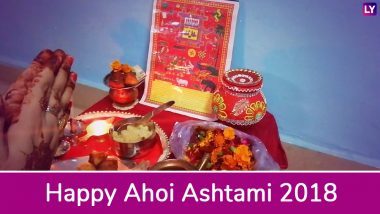 Ahoi Ashtami is dedicated to Mata Ahoi or Goddess Ahoi and is observed on the eight day of the lunar month. In 2018, Ahoi Ashtami will be observed on October 31. Ahoi Ashtami fasting is done eight days before Diwali on Krishna Paksha Ashtami. In North India, it falls during the month of Kartik and in Southern states it falls in the month of Ashwin. However, the fasting is observed on the same day across the country. Women fast on this auspicious day for the well-being and long life of their children. Ahoi Ashtami is marked four days after Karva Chauth and is popularly celebrated in North India. Below we tell you the shubh muhurat, auspicious timings, puja vidhi and significance of fasting on Ahoi Ashtami. Ahoi Ashtami 2018 Wishes: WhatsApp Messages, Facebook Status, GIF Images, SMS to Celebrate the Festival Observed by Mothers.

According to Hindu mythological legends, there lived once a woman in a village who had seven sons. In the month of Kartik, few days before the Diwali festivities, the woman decided to decorate the house for the celebrations. To renovate her house, she went in the forest to dig some soil. While digging the soil, she accidentally killed a lion cub with the spade. She felt extremely sad and guilty. Within a year of this incident, all her seven sons disappeared. The villagers claimed that they were killed by some animals in the forest. The woman then correlated all the misfortune with the accidental death of the cub. An elderly village woman advised her to offer her prayers to the Goddess Ahoi Bhagawati, an incarnation of Goddess Parvati as she is believed to be the protector of the offspring of all living beings.

On the day of the Ashtami, the woman drew the face of the cub and observed fast and performed Ahoi Mata puja. She repented for the accidental sin she had committed. Goddess Ahoi was pleased with her devotion and appeared before her and blessed her sons with long lives. Soon all her sons returned home alive. From that day onwards, it became a ritual to worship Goddess Ahoi Bhagawati every year on the day of Kartik Krishna Ashtami. The mothers pray and fast for the well-being of their children on this day.

Traditionally, mothers earlier used to fast from dawn to dusk for their son’s long lives but now they fast for their daughters as well. Fast is broken during twilight after sighting stars in the sky. The moon rises late in the night on Ahoi Ashtami. Similar to Karwa Chauth, women observe strict fast and abstain from consuming water as well.

On the day of the fasting, women take bath early morning and take a Sankalp or a pledge that they will observe fast for their children’s health. Before sunset, puja preparations begin with drawing an image of Goddess Ahoi on the wall. Any image of Ahoi Mata used for the puja should have eight corners due to the festival being associated with Ashtami tithi. Along with the image of the Goddess, an image of Sei or hedgehog, a mammal, should also be drawn. A Kalash filled with water should be kept at the place of worship. The food items which are used during the puja include 8 puris and halwa. After the preparations, women narrate the story of Goddess Ahoi and perform the puja.

Women break the fast by giving Argha to the stars or the moon depending on the family tradition. The fast is also kept by women who have difficulties in conceiving, have had miscarriage or desire a boy child. The day of Ahoi Ashtami or Ahoi Aathe is also known as Krishnashtami. The day is significant for those couples who don’t have any children. Couples take dip in the Radha Kunda at Mathura, perform puja and make offering.

(The above story first appeared on LatestLY on Oct 31, 2018 08:39 AM IST. For more news and updates on politics, world, sports, entertainment and lifestyle, log on to our website latestly.com).