Beating Retreat 2020: Date, Time, Venue, How to Buy Tickets, Where to Watch on TV and Other FAQs Answered 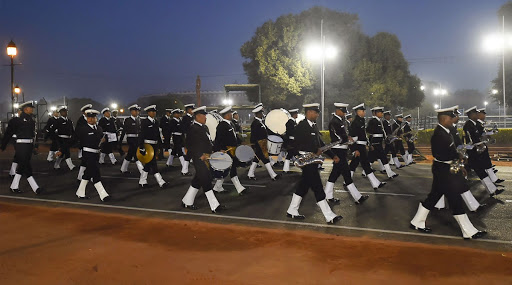 New Delhi, January 28: Beating The Retreat ceremony, which marks the culmination of four-day-long Republic Day festivities, would be held on Wednesday. The annual date of the event is fixed as January 29. The grand spectacle would feature the three wings of the armed forces - Indian Army, Indian Air Force and Indian Navy - displaying their massed bands before the President. Here are the major FAQs related to the event.

What are the date, time and venue of the event? The date, as mentioned above, is fixed as January 29 annually. The timing of the ceremony is scheduled as 6 pm. The Beating Retreat will be held at the iconic Vijay Chowk in the national capital. 'Abide With Me' Not to be Dropped From Beating Retreat Tunes, Christian Hymn Back on List After Decision to Drop Drew Flak.

How to buy tickets? The tickets for attending the ceremony could be bought from the designated counters in the national capital. The booking counters are located at North Block Roundabout, Sena Bhawan (Gate 2), Pragati Maidan (Gate 1 at Bhairon Road), Jantar Mantar (Main Gate), Shastri Bhawan (near Gate 3), Jamnagar House (opposite India Gate) and Red Fort (inside August 15 Park and opposite Jain Temple). The tickets are priced between Rs 20 to Rs 50.

Where to watch on TV? Beating The Retreat ceremony could also be viewed live on television on state broadcaster DD News. Most of the other public and private news channels also broadcast the event from Vijay Chowk.

A full dress rehearsal of the Beating Retreat ceremony is underway in the national capital, with only a day left for the event to take place. The display of military's massed bands in India first began in the early 1950s, when Major General G.A. Roberts, an officer in The Grenadiers, was asked by the then Prime Minister Jawaharlal Nehru to exhibit something "spectacularly creative" before the visiting dignitaries - Queen Elizabeth II and Prince Philip.