The day marks great importance every year as it commemorates Lord Buddha's enlightenment and birth. People meditate with utmost devotion and pay obeisance to Lord Buddha to mark the sacred occasion. 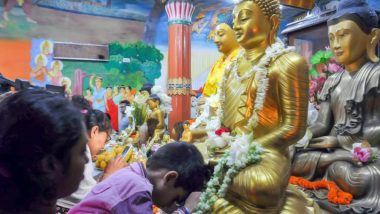 New Delhi, May 18: Scores of devotees thronged to Buddha temples on Saturday and offered prayers on the occasion of  Buddha Purnima. Buddha Jatanti, also known as Vesak, is the most sacred Buddhist festival. The special day is being celebrated across the country to mark the birth of Gautam Buddha, the founder of Buddhism. The day marks great importance every year as it commemorates Lord Buddha's enlightenment and birth.  People meditate with utmost devotion and pay obeisance to Lord Buddha to mark the sacred occasion. Buddha Purnima 2019 Messages in Hindi: Vesak Day WhatsApp Stickers, GIF Images, Quotes, SMS, Photos to Send Buddha Jayanti Greetings.

In several parts of India, people have taken the dip in holy rivers. In Uttar Pradesh, devotees were seen taking a holy dip in River Ganga in Prayagraj on the occasion of Buddha Purnima. Meanwhile in Bihar, devotees visited the Bodh Gaya's Mahabodhi Temple. In Varanasi, people thronged in large numbers at the Sarnath temple on the occasion of Buddha Purnima today.  19 Facts about the Founder of Buddhism, Siddhartha Gautama.

People offer prayers at Sarnath temple near Varanasi on the occasion of #BuddhaPurnima pic.twitter.com/chmwKVvaF0

Greetings and good wishes to fellow citizens and to the global Buddhist community on #BuddhaPurnima. Lord Buddha's message of peace, non-violence and compassion hold even greater significance today. May his teachings guide us towards universal fraternity #PresidentKovind

Vice President M Venkaiah Naidu also extended his greetings to the nation on this occasion. "I extend my warm greetings and good wishes to the people of our country on the auspicious occasion of 'Buddha Purnima. Lord Buddha was one of the most illustrious spiritual leaders to have walked this earth. He preached the most profound truths", Naidu said.

Greetings & Best Wishes on the auspicious occasion of #BuddhaPurnima

According to beliefs, it is believed that Lord Buddha was born, attained enlightenment and death (nirvana) of the same day i.e. on the full moon. Buddha Purnima is thus a very holy day for followers of Buddhism. Te holy day is not just celebrated in India but by Buddhists all over the world mostly in the Asian countries like Sri Lanka, Nepal, Tibet, Bangladesh and Bhutan.

(The above story first appeared on LatestLY on May 18, 2019 02:59 PM IST. For more news and updates on politics, world, sports, entertainment and lifestyle, log on to our website latestly.com).