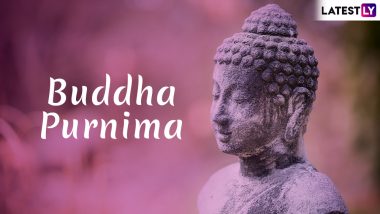 Buddha Purnima commemorates the birth, enlightenment and death of Gautam Buddha. Also known as Buddha Day or Vesak, the day is observed mostly by Buddhists and some Hindus. Countries like India, Sri Lanka, Nepal, Tibet, Bangladesh and Bhutan witnesses large scale celebrations on Buddha Jayanti. Buddha was born on a full moon, similarly, he attained enlightenment and even died on a Purnima. Buddha Purnima 2019 falls on May 18. Devotees of Buddha observe the day by listening to his teachings, remembering his compassion and engage in charity. Happy Buddha Jayanti 2019 Greetings: WhatsApp Stickers, GIF Images, Vesak Day Quotes and Messages to Send Buddha Purnima Wishes.

In India, Lord Buddha is considered as the eighth reincarnation of Lord Vishnu, hence the day sees a lot of festivities. The day is celebrated widely in India and Nepal as it is believed that Lord Buddha was born in the Lumbini region of Nepal and attained salvation in Kushinagar of India. Followers of Buddha dress in white clothes, visit Buddha temples and distribute kheer. According to the beliefs, it became a tradition after a woman named Sujata offered kheer to Gautam Buddha on this day. Other countries that also observe Buddha Purnimal include Indonesia, Singapore, Thailand, Cambodia, Laos, Malaysia, Myanmar, Mongolia, the Philippines, China, Japan, Korea, Taiwan and Vietnam. Buddha Purnima 2019 Wishes and Messages: Vesak Day WhatsApp Stickers, GIF Images, SMS, Quotes to Send Happy Buddha Jayanti Greetings.

Vesak is derived from the Sanskrit word Vaisakha which is the name of the lunar month used in ancient India that falls between April and May. In 2000, the United Nations decided internationally observe the day of Vesak at its headquarters and offices. While Buddhists observances are centuries-old, the decision celebrate Wesakha or Vesak as the Buddha's birthday was officiated in 1950, at the first conference of the World Fellowship of Buddhists held in Sri Lanka. The resolution was thereafter adopted at the World Conference. As the Vesak full moon day is the most important day for the followers of Buddhism, believers go to the pagodas in procession to pour water at the foot of the sacred tree in remembrance of the Buddha’s Enlightenment. While many go to Buddha shrines, people also flock the Mahabodhi Tree in Bihar's Bodh Gaya.

(The above story first appeared on LatestLY on May 18, 2019 09:32 AM IST. For more news and updates on politics, world, sports, entertainment and lifestyle, log on to our website latestly.com).