Earth Hour 2019 Date and Time: Know Theme and Significance of the Global Observance Aiming For a Greener Planet 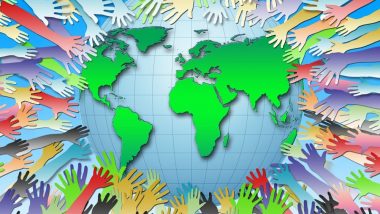 As much as awareness is created about the damage being caused to our planet Earth, it is never enough. To get more and more people a part of conservation efforts, an Earth Hour organised each year. Earth Hour is a day organised by the World Wide Fund for Nature (WWF) across countries to raise awareness on how energy consumption affects the environment. Earth Hour 2019 will be observed on March 30 between 8:30 pm and 9:30 pm. Those participating in Earth Hour are encouraged to switch off lights and other electrical appliances at homes, workplaces and other institutions encouraging less use of electricity. Famous landmarks, monuments, governmental buildings, housing societies, popular streets around the globe often participate in the event highlighting the need for energy consumption. Earth Hour 2019: From Candlelight Dinners to Stargazing, 5 Ways to Observe the Hour.

Moreover, the day is a reminder of how human activities have caused a large-scale impact on the planet. Earth Hour tries to inspire people to take action to save nature and the planet from further destruction. It motivates people to use environmentally-friendly products and push the implementation of laws that benefit nature. Earth Hour 2018-2020 tries to kickstart widespread conversations on the loss of nature and the urgency to protect it. As World Wildlife Day 2019 Highlights 'Life Below Water' Theme, Here Are 5 Biggest Threats to Our Oceans and Marine Life!

Join hands for the Earth!

Get ready to switch off and #Connect2Earth 💡 pic.twitter.com/nd5YQxuOX5

Earth Hour started in Australia's Sydney as a lights-off event in 2007. As the observance was well received by people, various countries began to mark it by turning off lights for an hour. Today more than 7,000 cities and towns in 187 countries celebrate the day with different events and workshops encouraging people to spend time with nature. Some years, when Holy Saturday which comes before Easter falls on the last Saturday of March, Earth Hour is shifted a week early. Eliminate Single-Use Plastics! Boat Made of Plastic Collected From Kenyan Beaches Sets Out on Voyage to Spread Message.

Earth Hour 2019 campaign is #Connect2Earth which raises awareness on the important role of nature in our lives. The theme for this year is 'Reduce, Reuse, Change the Way We Live'. It tries to showcase how we are dependant on nature in our daily lives for everything from food, clean air, fresh water and much more. The day also talks about nature's importance in the lives of humans and how we should understand the need to connect to our roots. Earth Hour highlights various pressing issues including loss of wildlife and natural habitat, climate change, global warming, sea warming and how these can directly affect us. 'Plastic Monster' Installed at Bandra Worli Sealink Promenade to Raise Awareness about Plastic Disposal.

With this theme, Earth Hour 2019 aims at creating awareness on reducing the use of plastic in our daily lives. Our seas and oceans are full of plastic terribly affecting marine life. Every year more than eight million tons of plastic end up in the oceans. The day encourages the use of recyclable materials and to change our overall living. It aims at bringing people together for the cause and to take positive actions in changing the current state of the environment. Events conducted during Earth Hour tries to bring a sense of responsibility among people and work towards betterment and sustainability of Earth.

(The above story first appeared on LatestLY on Mar 30, 2019 12:35 PM IST. For more news and updates on politics, world, sports, entertainment and lifestyle, log on to our website latestly.com).