Eliminate Single-Use Plastics! Boat Made of Plastic Collected From Kenyan Beaches Sets Out on Voyage to Spread Message

The boat is a reminder to the global policy-makers about the urgency to address and lessen the growing impact of plastics on the world's marine environment. 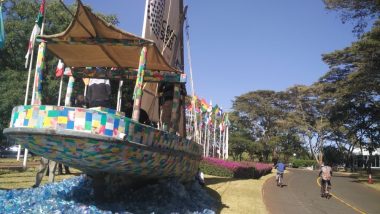 Boat made of single use plastic (Photo Credits: IANS Photo)

Nairobi, March 16: This flamboyant nine-metre-long dhow, made from 10 tonnes of plastic waste collected from Kenyan beaches and roadsides, sailed more than 500 km from the idyllic island of Lamu to Zanzibar this year with a message to eliminate single-use plastics. And it also reminds the global policy-makers the urgency to address and lessen the growing impact of plastics on the world's marine environment.

The Flipflopi dhow was positioned right at the entrance of the conference venue in the UN Environment headquarters in Nairobi where over 4,700 delegates from 170 countries gathered for the week-long UN Environment Assembly, the world's highest-level decision-making body on the environment. "Marine plastic litter pollution is already affecting more than 800 marine species through ingestion, entanglement and habitat change," UN Environment's coral reef unit head Jerker Tamelander said. As World Wildlife Day 2019 Highlights 'Life Below Water' Theme, Here Are 5 Biggest Threats to Our Oceans and Marine Life!

"Waste continues to leak from land and coral reefs are at the receiving end. They also trap a lot of fishing gear as well as plastic lost from aquaculture. With the impacts of climate change on coral reef ecosystems already significant, the additional threat of plastics must be taken seriously." The majority of marine litter - between 60-80 per cent - is composed of plastic. Global Warming at 1.5°C: Rapid, Far-Reaching Changes Needed, Says IPCC. 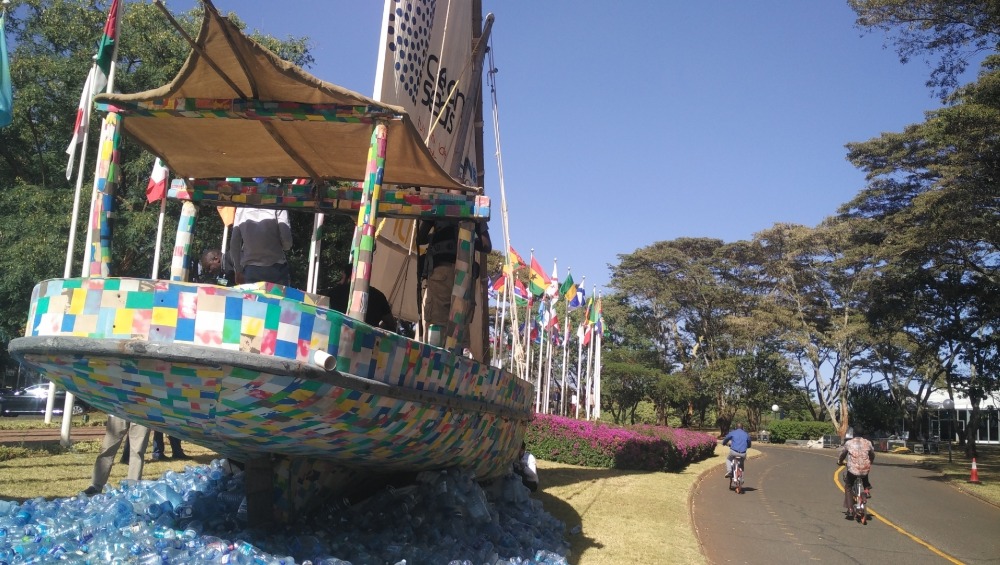 Only nine per cent of the nine billion tonnes of plastic the world has so far produced has been recycled. The overwhelming majority of plastics - comprising drinking bottles, bottle caps, food wrappers, grocery bags, lids and straws - are designed to be thrown away after a single use, ultimately ending up in landfills and polluting the environment. "The first leg of the journey is over, but the journey continues," Kenyan entrepreneur and Flipflopi project leader Dipesh Pabari told reporters here. 4 Truths That Make Us Wonder Whether The Earth Will Survive 50 Years From Now.

"When you are on the boat and you come to know that it's made from your toothbrushes and Pet bottles. You will ask how and that is the real story," he said. Coming from a family of carpenters and dhow builders in Lamu, an island off the North Coast of Kenya, Ali Skanda is intimately familiar with what goes into building a dhow - a sailboat that has been used in East Africa for more than a thousand years.

On its maiden 500-km-long sojourn, supported by the UN Environment's Clean Seas campaign, the Flipflopi stopped at towns and cities to sensitize the communities on ways to cut down use of single-use plastics. A report, Plastics and Shallow Water Coral Reefs, released at this UN Environment Assembly, which focus on innovative solutions for environmental challenges, identifies a number of knowledge gaps that must be addressed to strengthen the scientific evidence base for action on marine plastics that impact coral reefs. 60 Percent of Earth's Wildlife Has Been Lost, We Are the 'Last Generation' That Can Save Nature, Says WWF.

Inspired by 15-year-old Swedish climate activist Greta Thunberg, activist Rebecca Freitag, 26, a UN delegate for sustainable development from Germany, told IANS that the youth should be given participation in environment talks as they comprised 25 per cent of the global population. Before coming to the UN summit, she collected the plastic waste from roadsides of Kenya, which introduced the world's toughest laws on single-use plastic bags two years ago, and got her dress stitched to spotlight solutions for the growing impact of plastics on the world's marine environment. 6000 Endangered Fish Dies in China Due to Construction of Bridge; Work Halted.

The Flipflopi is now ready for a voyage next month for a greater political and social awareness of the issue of plastic pollution. "Now we want to build a 20-m long boat that is capable of sailing to South Africa and beyond," Pabari said. For this, $1.5 million is required. The Flipflopi team has had to pioneer new techniques to craft the dhow's various components. The plastic waste was melted, shaped and carved by the team of traditional dhow builders exactly as they would do with wood. Every single element of the boat has been constructed by hand and the whole boat has been clad in colourful sheets of recycled flipflops. These flipflops have been collected on beach cleanups on Lamu's beaches, where they are among the most prolific items found.

(The above story first appeared on LatestLY on Mar 16, 2019 08:20 AM IST. For more news and updates on politics, world, sports, entertainment and lifestyle, log on to our website latestly.com).