Feliz Año Nuevo to Bonne Annee, Know How to Say and Wish Happy New Year 2019 in Spanish, French and Other Foreign Languages

While festivities may vary from country to country, the spirit of the day remains the same everywhere. 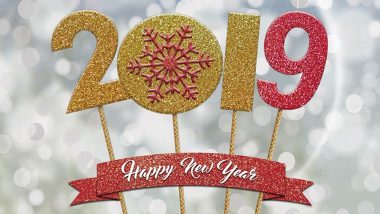 It's New Year time, the event that unites everyone worldwide.  Everyone from Australia to Russia, India to Alaska are waiting in anticipation to welcome the Happy New Year 2019. The last week of December is the peak season for celebrations and witnesses tonnes of get-togethers and events. Across countries, people celebrate New Year with great pomp and enthusiasm. Various traditional events and functions are also held on December 31 welcoming the New Year.

Although festivities may vary from country to country, the spirit of the day remains the same everywhere. Coupled with Christmas, the end of December is known as Holiday season which is marked with large-scale celebrations in most parts of the world. While 'Happy New Year' is the English term commonly used, people coming from different nationalities have different ways to wish the day. And as we wait for the arrival of New Year 2019, we have compiled a list of how to wish Happy New Year in 10 different languages. World Hello Day 2018: History of the Day and How You Can Say Hello in 10 Different Languages!

Know how to wish Happy New Year in 10 different languages below:

January 1 is celebrated as New Year's Day across countries as per the Gregorian calendar. During pre-Christian times, the day was dedicated to Janus, the Greek God of gateways and beginnings, after whom January is named. New Year's Day is the most celebrated public holiday across countries. Fireworks at the stroke of the midnight have popularly come to the mark our passing into the New Year in modern times. We at LatestLY wish everyone Happy New Year in advance!

(The above story first appeared on LatestLY on Dec 31, 2018 03:26 PM IST. For more news and updates on politics, world, sports, entertainment and lifestyle, log on to our website latestly.com).