Also called Gangavtaaran, it will be celebrated on May 31- June 1 this year. This time, however, because of the lockdown there won't be any grand celebrations or pujas of the masses. Ahead of this festival, let us look more into its history, significance and how it is celebrated otherwise. 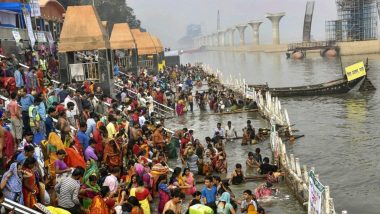 River Ganga is considered the holiest rivers of India, which has its mention in several mythological tales. People worship the river as Ganga Maa and the day of her descent on the planet is no less than a festive occasion. The Ganga Dussehra or Ganga Dashara marks the day on which river Ganga Maa presented on the planet. Also called Gangavtaaran, it will be celebrated on May 31- June 1 this year. This time, however, because of the lockdown there won't be any grand celebrations or pujas of the masses. Ahead of this festival, let us look more into its history, significance and how it is celebrated otherwise. Ganga River Flows Clear as Crystal at Rishikesh! Watch Viral Video of Clean Running Water Near Lakshman Jhula.

It falls on the Dashami Tithi or the tenth day of the bright half of the moon in the month of Jyaistha as per the Hindu calendar. This year Ganga Dussehra will be celebrated on June 1. Devotees gather by the river and take a dip into the holy waters, as it is said to purify one's soul and free them from their past sins.

History and Significance of Ganga Dusshera

River Ganga's descent on the Earth has legends in mythology. As per the legend, King Sagara and his 60,000 sons were killed because of wrath incurred by sage Kapila. Sagara's great-grandson Bhagiratha wanted to conduct a ceremony for his ancestors. But to conduct the ceremony there was no water. He then made an appeal to Lord Brahma and Lord Shiva to help river Ganga descend on Earth. Lord Shiva is said to have let Ganga fall from his head to the ground. When the holy waters of river Ganga touched the ancestors of Bhagiratha, it later led to flourishment of the region. So River Ganga is said to be very holy.

Rishi Bhagirath performed a deep meditation for years to convince Ganga Maa to come on earth. Ganga, it is said, earlier flowed in heaven. The day on which she came back on the earth, marks Gangavataran.

This festival is mostly celebrated with great fervour in the states of Bihar, Uttar Pradesh and West Bengal. It is believed that taking a dip in the Ganga river will eliminate 10 sins of a person. So people gather around the Ganga ghats, perform a puja and then take a dip in the waters. It is celebrated majorly at Ganga ghats of India such as Varanasi, Allahabad, Garh-Mukteshwar, Prayag, Haridwar and Rishikesh.

This year because of the pandemic, there won't be grand celebrations of the festival.

(The above story first appeared on LatestLY on May 29, 2020 09:00 AM IST. For more news and updates on politics, world, sports, entertainment and lifestyle, log on to our website latestly.com).