Shri Jagannathji, Balabhadraji, and Subhadraji are worshipped in the temple of Jagannath Puri, Odhisa. The three deities are taken out from their sanctum sanctorum once a year. The occasion is celebrated as Rath Yatra, which will be observed on Friday, 1 July 2022. 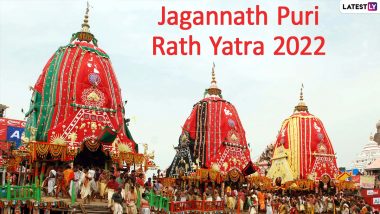 Odhisa's resplendent and grand occasion of Lord Jagannath Rath Yatra is observed by the people from across the world in Puri. It is said that the Ratha Jatra is the only event of the year when the Lord of the Universe, Shri Jagannath, comes out of the temple for his devotees and everybody else who can't go inside the temple for religious reasons. Jagannath Rath Yatra 2022 will start on July 1, 2022, and end on July 12, 2022. The occasion is also called the Chariot festival or Car festival when Lord Jagannath, with his brother Lord Balabhadra and sister Subhadra, comes out of the 12th-century temple. The Lords visit their aunt's home, Gundicha temple via maternal aunt's house, and Mausi Maa Temple near Saradha Bali, Puri. Ratha Yatra 2022 Date: When Is Jagannath Puri Rath Yatra? Know About Suna Besha Rituals, Celebration and Significance of Odisha's Famous Chariot Festival.

The sacred procession begins with invoking the deities with special prayers and customs known as 'Ratha Prathistha'. After that, the three vibrantly decorated colourful chariots are taken out in the streets of Puri, along with thousands of devotees. This tradition is known as 'Badadanda'. If you wish to attend the long-established Ratha Jatra, scroll down to know everything in detail. Jagannath Puri Rath Yatra 2022 Wishes & Greetings: Download HD Images, WhatsApp Messages, Facebook Quotes, Wallpapers & SMS To Send during the Auspicious Hindu Festival.

Ratha Jatra is the only period in the year when the three deities Lord Jagannath, Lord Balabhadra and sister Subhadra leave the sanctum sanctorum of the main shrine and stay at the Gundicha temple for nine days. As per the Panchang, Rath Yatra is held on the Dwitiya Tithi of the Shukla Paksha in the month of Ashadha (June-July). The festival will be celebrated on Friday, July 1, after sunrise. The Dwitiya Tithi will begin at 10:49 am on June 30 and will be in effect till 01:09 pm on July 1. Puri Rath Yatra 2022: Craftsmen Make Identical Jagannath Chariots Without Any Manuals or Modern Machines For Odisha's Annual Festival (See Pics).

The excitement of the Chariot festival is at its peak. Railways have announced special trains for the smooth travelling of the pilgrims. Lakhs of devotees, who have already reached the holy town, will pull the three gigantic chariots. To observe the pious occasion virtually, you can watch the live broadcast of the Jagannatha Ratha Yatra 2022 by clicking on the above YouTube link. It will be a sacred reunion of devotees with the Lord as participation of folks in the festival has been allowed this time after a gap of two years.

(The above story first appeared on LatestLY on Jun 30, 2022 02:05 PM IST. For more news and updates on politics, world, sports, entertainment and lifestyle, log on to our website latestly.com).