Maha Panchami 2022 Date & Significance: From Bilva Nimantran Puja to Kalparambha Ritual, Everything You Need To Know About This Auspicious Celebration During Durga Puja

After celebrating Mahalaya, Sharad Navratri will start from September 26 and on October 5 the festival of Vijayadashami i.e. Dussehra will be celebrated. Although every single day of Navratri is very special, but its Panchami date is called Maha Panchami holds its own unique significance. 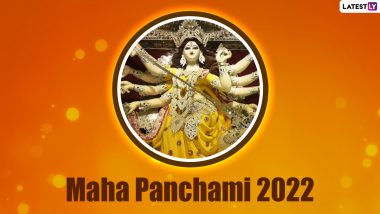 After celebrating Mahalaya, Sharad Navratri will start on September 26 and on October 5 the festival of Vijayadashami i.e. Dussehra will be celebrated. Although every single day of Navratri is very special, its Panchami date is called Maha Panchami and holds its own unique significance. People in West Bengal wish each other "Subho Panchami" to celebrate this observance. On this day, where Skandmata, the fifth form of Goddess Durga, is worshipped, the next day marks the beginning of the Durga Puja festival in West Bengal. During the Maha Panchami celebration rituals such as Bilva Nimantran, Kalparambha Akal Bodhon, Amantran and Adhivas hold much significance for the Maa Durga devotees. Durga Puja 2022 Calendar: Dates, Significance, History, Rituals and Ways To Celebrate This Grand Festival for Worshipping Goddess Durga.

Bilva Nimantran, one of the important rituals that take place to begin the Durga Puja festival, usually takes place on Panchami or Shashti tithi. It is believed that Sanyakal (dawn) on Shashti is the best time to perform Bilva Puja; however, if that is not possible, people can observe on Panchami tithi. The word “Nimantran” means “invitation” and during this ceremony, devotees invocate Goddess Durga in the Bilva tree for the festival.

Kalparambha marks the beginning of Durga Puja rituals in West Bengal. It is considered equivalent to Bilva Nimantran in other states. Kalparambha is done one day before Kolabou Puja, also known as Navpatrika Puja.

Akaal Bodhan (Bengali: অকাল বোধন) is the worship of Durga, in the month of Ashwin, an uncustomary time to celebrate the festival in her honour. The word “Akaal” means “untimed” (kaal=time and a=not) and the word “Bodhan” means “worship” or “invocation”. Thus, Akaal Bodhan means worship or invocation of Durga in an uncustomary time. It is given this name since the period of this worship differs from the conventional period, which is during the spring (Basant).

Amantran and Adhivas is also another name for the same ritual of inviting or invocating Maa Durga in the Bilva Tree. The word "Amantran" means "invitation." And Adhivas ritual is performed to invocate the Maa Durga in Bilva tree for the entire festival time.

(The information provided here is based on beliefs and legends only. Before applying any information in real life, consult the concerned expert.)

(The above story first appeared on LatestLY on Sep 19, 2022 02:23 PM IST. For more news and updates on politics, world, sports, entertainment and lifestyle, log on to our website latestly.com).