Memorial Day 2020 in United States: When Was Decoration Day Changed to Memorial Day? What Was Memorial Day Originally Called? Here Are All FAQs Answered 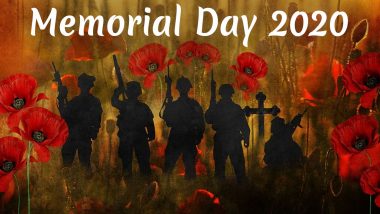 What Was Memorial Day Originally Called?

Memorial Day was originally known as Decoration Day in the 1800s. The name originated from the tradition of decorating graves with flowers, wreaths and flags. People would take out time to honour and remember those who died for the country and visit their graves. Family members would together decorate the graves and cemeteries as a remembrance and gratitude for their service. As decoration became popular on the day, it came to be known as Decoration Day.

It was then widely observed on May 30, 1868, to commemorate the sacrifices of Civil soldiers following a proclamation of Gen. John A Logan of the Grand Army of the Republic, an organisation of former Union sailors and soldiers. During that first national commemoration, former Union Gen. and sitting Ohio Congressman James Garfield made a speech at Arlington National Cemetery, after which 5,000 participants helped to decorate the graves of the more than 20,000 Union and Confederate soldiers who were buried there. Memorial Day 2020 During COVID-19 Pandemic: From Virtual Experiences to Incorporating Social Distancing Measure, Ways To to Honour The Fallen Amid Coronavirus Outbreak.

Following which, in 1873, New York became the first state to designate Memorial Day as a legal holiday. By the late 1800s, more cities and communities observed Memorial Day, and various states declared it a legal holiday. After World War I, it became an occasion to honour those who died in during different wars in America, thus it became a national holiday throughout the United States.

When Was Decoration Day Changed to Memorial Day?

In 1971, Congress passed the Uniform Monday Holiday Act and established that Memorial Day to be commemorated on the last Monday of May. Memorial Day is now officially commemorated at Arlington National Cemetery each year with a ceremony in which a small American flag is placed on each grave. Traditionally, the President or Vice President lays a wreath at the Tomb of the Unknown Soldier which is attended by around 5,000 people.

Today, on Memorial Day, people visit graves and pay tributes to those who died in wars defending the country. They offer flowers, lay wreaths and the national flag on the graves remembering their contribution towards the motherland. People also host family gatherings and participate in parades. It also unofficially marks the beginning of the summer season.

(The above story first appeared on LatestLY on May 25, 2020 07:35 AM IST. For more news and updates on politics, world, sports, entertainment and lifestyle, log on to our website latestly.com).