Nag Panchami 2020: Cobra Snakes Do NOT Drink Milk, Here's What You Should Know About This Myth and Worshiping of Snakes on This Day

Nag Panchami which will be marked tomorrow July 25. The Naag snake or the Cobra has a significant place in Hindu mythology. This festive day sees worship of snakes in which people offer them milk and flowers. But do snakes really drink milk? 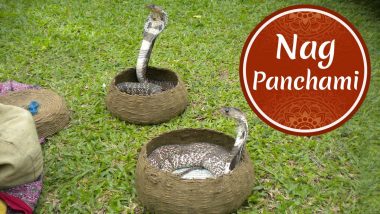 During the holy month of Shravan, various important festivals are celebrated. One such celebration is Nag Panchami which will be marked tomorrow July 25. The Naag snake or the Cobra has a significant place in Hindu mythology. This festive day sees worship of snakes in which people offer them milk and flowers. Snake charmers usually come around with snakes in their basket and people offer the cobra with some milk. But do snakes really drink milk? No, it is a myth, in fact, milk can be dangerous for a snake. Ahead of this auspicious celebration, we look at some myths that are associated with snakes in India. Nag Panchami 2020 HD Images and Wallpapers For Free Download Online: WhatsApp Stickers, Facebook Messages and Greetings to Celebrate the Hindu Festival of Worshipping Snakes.

Why is Milk Offered to Snakes on Nag Panchami?

There are different legends about this practice of offering milk to snakes. One of the mythological legends notes a snake named Kalia. This snake was said to be poisoning the river Yamuna which affected the people living around. So Lord Krishna took down Kalia and defeated him. Krishna forced Kalia to take back all the poison from the water. There's a belief that whoever will offer milk to snakes on this day will be relieved of all their sins. Nag Panchami 2020 Date During Sawan Month: Know The Significance, Traditions And Celebrations Related to Hindu Festival Worshipping Snakes.

Another story is about a farmer whose son killed a baby snake in the field. An angered mother snake bit the farmer, his wife and other two sons. The farmer's daughter begged for forgiveness and offered milk to the snake. The snake was pleased by the girl's devotion and forgave the farmer's family, retrieving them back to life. So people offer milk to snakes to please them.

So these are some of the points one must know and create awareness about these festive celebrations. If you see someone feeding milk to these snakes in the vicinity bring it to their notice that it is not the ideal way of worship.

(The above story first appeared on LatestLY on Jul 24, 2020 03:33 PM IST. For more news and updates on politics, world, sports, entertainment and lifestyle, log on to our website latestly.com).