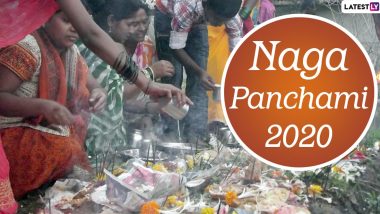 Naga Panchami is a Hindu traditional festival during which people worship snakes. The day is observed in India, Nepal and by Hindu communities across countries. As per the Hindu calendar, Nag Panchami falls on the fifth day of the bright half of lunar month of Shravana or Sawan. Nag Panchami 2020 will be observed on July 25. People worship snakes on this day and seek blessings. It generally falls two days after Hariyali Teej. Believers offer milk to Nag Devta and women pray for the well being of their brothers and family. Brahmins observe fast on Naga Panchami and celebrate the day following varying customs and traditions. They pray to snake Gods to protect them from snakebites and offer rice pudding, flowers, milk and sweets to snakes.

As per Hindu beliefs, prayers that are offered to live serpents reach the snake Gods. Snakes are known by varying names of which twelve snakes are worshipped including Ananta, Vasuki, Shesha, Padma, Kambala, Karnataka, Ashvatara Ashvatara, Dhritarashtra, Shankhapala, Kaliya, Takshaka and Pingala. On Nag Panchami, people plater the walls and doors of their houses with a sign of serpent milk and adorn statues of a snake with flowers, sandalwood and milk.

(The above story first appeared on LatestLY on Jul 25, 2020 08:49 AM IST. For more news and updates on politics, world, sports, entertainment and lifestyle, log on to our website latestly.com).