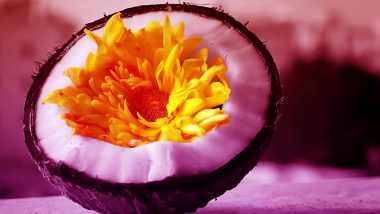 Narali Purnima or Poornima is a popular festival in Maharashtra. Also called Coconut Day, it is is celebrated by the Hindus of the fishing community of the state with a lot of fervour. Narali Purnima falls on the full moon day or Purnima of the Hindu month of Shravan. Narali Purnima 2020 is on August 3; it is the same day when Raksha Bandhan will be celebrated in the country. There are many rituals and celebrations attached to the observation of Narali Purnima. The ocean is worshipped with rice, flowers and coconuts as offerings. In this article, know Narali Purnima 2020 date, significance, puja vidhi, shubh muhurat, celebrations, rituals, Purnima tithi and everything about coconut festival.

Narali Purnima is a ceremonial day observed by the Hindu fishing communities in Maharashtra. Narali means coconut and the festival are observed to mark the end of the monsoon season, as the fishermen can begin fishing safely and start-off with their trade. Some people also plant a tree on the day of Nariyal or Narali Purnima to show their respect towards nature.

On Narali Purnima, devotees worship God Varun. They offer nariyal or coconut to the God of the sea. It is believed that the puja offered to the sea on Shravana Purnima is of utmost significance. The fishermen are protected from all sorts of untoward incidents. Maharashtrians Brahmins perform ritualistic Shravani Upakarma on this day. They observe fast and eat the only coconut. No fishing is done during this period. It is only after Narayali Purnima puja, that people can begin fishing and even consume fish, as their traditional recipe—a sweet fish curry made from coconut.

Narali Purnima is a significant festival. People dress up in the traditional attires and come together to perform puja to the sea. However, this year’s celebration will be different because of the pandemic. Maharashtra is the worst-hit state of COVID-19, and strict restrictions have been implemented across the state, limiting festival celebration.

(The above story first appeared on LatestLY on Aug 02, 2020 09:15 PM IST. For more news and updates on politics, world, sports, entertainment and lifestyle, log on to our website latestly.com).