National Daughters Day 2019 Date and Information: Everything About the Day for Celebrating Girls and Women 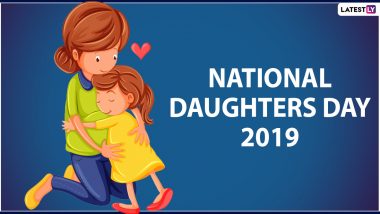 India will mark the celebration of National Daughters Day 2019 on September 22. As the name suggests, it is a day to honour the daughters of the family. Different countries mark this day on different dates and in India, it is celebrated on the fourth Sunday of September. So Daughter's Day 2019 falls on September 22 this year. Ahead of these celebrations, we give you all National Daughters Day information. Son and Daughter Day 2018 Date: What, Where & How is it Celebrated in the United States.

In a country like ours, where we unfortunately still hear cases of female foeticide, crime against girls, dowry deaths marking this day is more significant. Despite several girls and women growing up and making the country proud with their achievements, still, daughters are looked upon as a burden by many. A famous quote reads, "A daughter is the happy memories of the Past, the joyful moments of the Present, and the hope and promise of the Future," and they deserve all the honour. Every child is special irrespective of their gender- male or female and there should not be a comparison among the two. But we still hear of the rising crimes against girls. So dedicating a day to honour and respect the daughters is important.

This day also reflects on the development a girl, a woman or a mother brings into the family. This day is a celebration to strengthen the both between parents and their daughter. A girl child is a gift in herself and she should be tended with love and care.

(The above story first appeared on LatestLY on Sep 17, 2019 02:13 PM IST. For more news and updates on politics, world, sports, entertainment and lifestyle, log on to our website latestly.com).