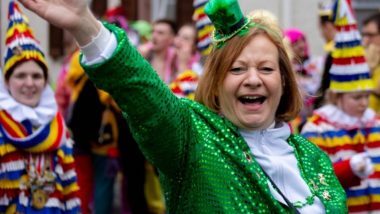 March 17 marks the celebration of St. Patrick's Day 2020. Also known as the Feast of Saint Patrick is a day that celebrates the heritage and culture of the Irish in general. But this time, the Coronavirus pandemic has affected the celebrations in Ireland. The big parades across the country stand cancelled amidst the rising cases of COVID-19. The Belfast City Council in Northern Ireland voted to cancel the gathering last week. Earlier, Taoiseach (Irish PM) Leo Varadkar had announced all parades and festivals in the Republic of Ireland would not go ahead. Other parades in Northern Ireland are still scheduled to happen, but they are under review. The St. Patrick's Day festival in Ireland takes place annually from March 13 to 17. Trump to Skip St. Patrick's Day Hill Luncheon, Blames Pelosi.

The government in a statement said, "Due to the unique nature and scale of the St Patrick's Day festivities, in terms of size, the mass gathering of local and international travellers, and the continued progression of community transmission in some European countries, along with the emergence of a small number of cases of local transmission in Ireland, the Government has decided that St Patrick's Day parades, including the Dublin parade, will not proceed."

Varadkar, the head of the Irish government, said that the virus cannot be stopped, but it can be slowed down. One of the biggest parades, in Dublin, was due to happen next week. The city cancelled the celebration over coronavirus fears. According to the city's tourism department, more than 5,00,000 people were expected at the parade resulting in a big blow to the local economy.

The city said it made the decision after a "risk assessment, based on World Health Organization guidelines ... which concluded that based on the demographic of those attending the parade, the close proximity of people attending the event and the duration of the event (among other considerations), Cork City Council is not in a position to provide the necessary assurances in relation to current WHO Guidelines."

Dr Tony Holohan, chief medical officer at the Department of Health said that Ireland is in the containment phase of combating the virus, and "all of the decisions we take are focused on limiting the impact of this disease on our population and our health service." Until now, there are 24 confirmed cases of the novel coronavirus in Ireland.

(The above story first appeared on LatestLY on Mar 16, 2020 07:15 PM IST. For more news and updates on politics, world, sports, entertainment and lifestyle, log on to our website latestly.com).