Puran Poli is among sweet dishes prepared largely in Maharashtrian households. And as Ganpati celebrations continue, we bring to you the recipe to make puran poli which can be easily prepared at home. 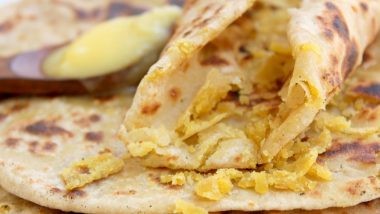 Ganesh Chaturthi, the festival observing the birth of Lord Ganesha has begun and celebrations are in full swing. While Ganesh Chaturthi is celebrated in major parts of India, the state of Maharashtra witnesses large scale festivities. And food is an integral part of the celebrations, like any other Indian festival. Although modak is one of the sweets popularly made during the festival, many other desserts are also made during Ganeshotsav. Puran Poli is among sweet dishes prepared largely in Maharashtrian households. The dish is quite easy to make and people relish it. And as Ganpati celebrations continue, we bring to you the recipe to make puran poli which can be easily prepared at home. Ganeshotsav 2019 Shrikhand Recipe: How to Make Traditional Kesari Shrikhand This Festive Season (Watch Video)

Puran Poli is also known as god poli, puranachi poli, pappu bakshalu, bobbattu, oliga or bakshalu. The delicacy is a sweet Indian flatbread which originated in the Deccan regions. It is made from ingredients which you will easily find at home. The mixture which goes into the making of puran poli includes maida, cardamom powder or nutmeg powder, chana, sugar or jaggery and ghee. Ganeshotsav 2019 Bhog for Day 5 – Kothimbir Vadi: Offer This Traditional & Easy Snack to Ganpati Bappa on Ganesh Chaturthi (Watch Video)

Here's The Recipe to Prepare Puran Poli at Home:

Ganesh Chaturthi was celebrated on September 2 this year. The ten-day festival will end on Anant Chaturthi which will be celebrated on September 13. Ganesh Chaturthi is observed every year on the fourth day of the waxing moon period, also known as Shukla Chaturthi in the Hindu month of Bhadrapada. In Maharashtra, cities like Mumbai and Pune witnesses large scale festivities with people from different states pouring in to catch a glimpse of their favourite Ganpati pandals. We wish everyone Happy Ganeshotsav!

(The above story first appeared on LatestLY on Sep 07, 2019 08:00 AM IST. For more news and updates on politics, world, sports, entertainment and lifestyle, log on to our website latestly.com).