He worked on a video with Aseel Hameem, Adam Afara and Husam Taha and raised his stocks in the fashion and entertainment niche. 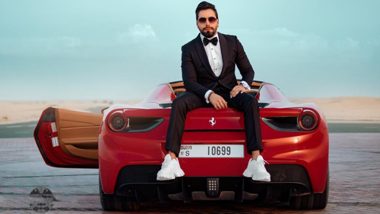 He worked on a video with Aseel Hameem, Adam Afara and Husam Taha and raised his stocks in the fashion and entertainment niche.

There are two types of people in this world: dreamers and others who are action-takers. "Be the latter," suggests Daniel Orlando Ortiz Oporto, a 1979-born Bolivian fashion designer, brought up in Beverly Hills, CA and the one, who studied from Military school, Washington DC. Daniel Oporto is definitely more than what meets the eye, as he has achieved monumental success as a producer, fashion designer and entrepreneur while performing his duties as a single parent and also a philanthropist. His clothing brand based in Dubai, "Daniel Oporto couture", has become a sought-after brand in fashion for its unparalleled designs and make with a line of suits and Tuxedos, created with much love, passion and focus on comfort and elegance.

Apart from the name that Daniel Oporto has achieved being a man of multiple talents, he recently made more headlines when he worked with Aseel Hameem, a well-renowned Iraqi singer, a beautiful talent who enjoys millions of fans and followers on Instagram and others. Daniel Oporto went gaga talking about the experience, which also gave him the opportunity to work along with incredible other talents like Adam Afara, Dubai-based American designer, and Husam Taha, musician, producer and film director. He said that the entire experience was fascinating, working with them and for them as a producer and a designer of his clothing brand Daniel Oporto couture.

Daniel Oporto earned a name for himself worldwide for making clothes for famous people like Leonardo DiCaprio, Johnny Depp, Angelina Jolie, Brad Pitt, many of the Royal Family in Qatar, and others. Daniel Oporto also has many famous fashion shows to his name, one which made the most buzz was in Qatar, the biggest fashion show with over 7,000 people. He was one of the lead designers at Mall of Qatar's (MoQ) first-ever Spring/Summer Fashion Festival and presented a Qatari-inspired suits collection dubbed as 'Tamim.'

The kind of networks Daniel Oporto developed in Dubai, which is his base right now, and the amount of name he made with his works in fashion, production and also philanthropy, helped him connect with many big names of the world, which recently included Aseel Hameem. The ace businessman, producer and fashion designer has travelled the world to more than 70 countries already, earning rich experiences and expertise in his works.

One of the many reasons that have brought him to the forefront of these industries is also his ability to act with universal values, be responsible and grateful for everything around him, the values which he wants others to imbibe as well.