"The considerable increase in idiopathic intracranial hypertension we found may be due to many factors but likely mostly due to rising obesity rates," said researcher William Owen Pickrell from Swansea University in the UK. 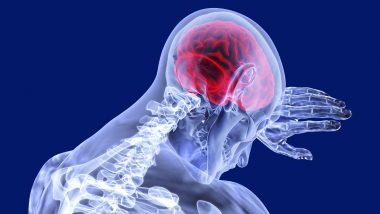 London, January 21: A brain pressure disorder called idiopathic intracranial hypertension is on the rise, and the increase corresponds with rising obesity rates, a new study suggests. Idiopathic intracranial hypertension is when the pressure in the fluid surrounding the brain rises. It can mimic the symptoms of a brain tumour, causing chronic, disabling headaches, vision problems and in rare cases, vision loss. It is most often diagnosed in women of childbearing age. Treatment is often weight loss and in some cases, surgery may be required.

"The considerable increase in idiopathic intracranial hypertension we found may be due to many factors but likely mostly due to rising obesity rates," said researcher William Owen Pickrell from Swansea University in the UK. Cell Injection Technique Developed by Researchers to Help Reverse Vision Loss.

For the study, published in the journal Neurology, the researchers used a national healthcare database to analyze 35 million patient years of data over a 15-year period, between 2003 and 2017 in Wales. They identified 1,765 people with idiopathic intracranial hypertension during that time. Of the group, 85 per cent were women.

The team recorded body mass index measurements for study participants. Body mass index is calculated by dividing weight by height. For every one person with the disorder, researchers compared three people without it who were matched for gender, age and socioeconomic status.

The socioeconomic status of each person with the disorder was determined by where they live, using a national scoring system that considers factors like income, employment, health, education and access to services. People in the study were then divided into five groups ranging from those with the fewest socioeconomic advantages to those with the most.

The team found that the increasing number of people living with the disorder corresponded to rising obesity rates during the study, with 29 per cent of the population being obese in 2003 compared to 40 per cent in 2017.

(The above story first appeared on LatestLY on Jan 21, 2021 11:35 PM IST. For more news and updates on politics, world, sports, entertainment and lifestyle, log on to our website latestly.com).