Can Dogs See Ghosts? Here Are 5 Things Which Dogs Are Capable of That Humans Can't

Not only are they guardians against the thieves but there is a research about them being too aware even of paranormal existence. 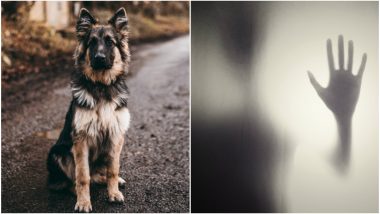 We keep on reading about dogs being the best companions. Dog lovers too would agree with the statement very well. Not only are they guardians against the thieves but there is a research about them being too aware even of paranormal existence. In fact, not just dogs but in general pets are said to have an idea about paranormal activities. But it is the dogs who are said to have a sixth sense.

Like any theory, there are counter theories to it. So there are people who say its just that dogs have a better sense of smell and sound and that really doesn’t count as the sixth sense. Although the reaction given by them differs. Pet psychologist Marti Miller was quoted to Animal Planet, “Dogs don't judge what is going on in the environment. While our own minds start to analyze what is happening, dogs don't do that. They feel the barometric pressure change, and may react by shaking, panting, salivating and feeling anxious, or they may not react at all." Let us see what can dogs sense which us humans cannot.

Dogs usually do have a sixth sense. Dog owners would’ve experienced how dogs usually sense the emotions if someone is sad and they do go and cheer them up. So be it natural disasters or paranormal activities, dogs definitely have a sense which humans somewhere lack.

(The above story first appeared on LatestLY on Apr 02, 2018 08:39 PM IST. For more news and updates on politics, world, sports, entertainment and lifestyle, log on to our website latestly.com).