Do You Have A Crease On Your Earlobe? Indian Doctor Says It’s A Sign of Heart Disease 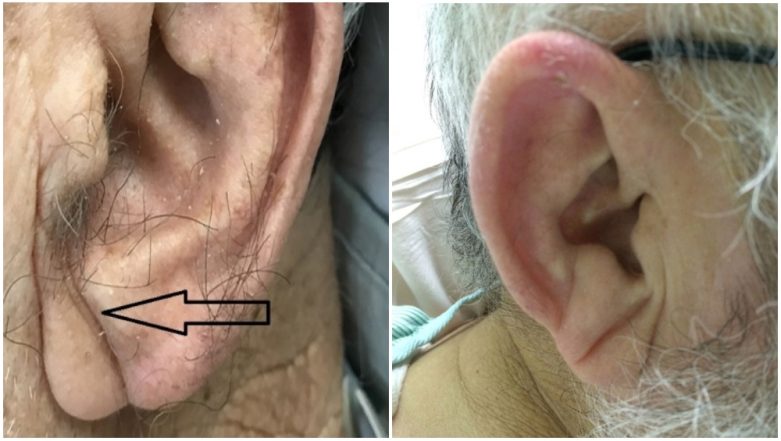 Did you know that an inconspicuous crease on the earlobe could point to a serious health condition? A doctor from Maharashtra’s rural hinterlands has drawn an association with the diagonal earlobe crease (DELC) or Frank’s sign and an increased incidence of coronary heart diseases. According to The Times of India, Dr Himmatrao Bawaskar from Mahad, Maharashtra studied patients suffering from diabetes and hypertension to conclude that 508 of the 888 studied were suffering from ischemic heart disease. So instead of subjecting them to a battery of tests, the doctor takes a closer look at his patients.

Dr Bawaskar is a well-known name in the medical field and has gained international fame for his work on snake bites and scorpion sting. He observes that the DELC could serve as a marker for doctors to identify ischemic heart disease.

The theory, however, isn’t new. The crease and its correlation with cerebrovascular disease and peripheral vascular disease were first mentioned by Sanders T Frank in 1973, after whom the crease is named. It's been observed to be a sign of coronary artery disease and has been a subject of much controversy ever since the theory was first put forth. 8 Surprising Facts about Heart Diseases in Women.

Large population has shown an association of the Frank's sign with an increased risk of ischaemic heart disease and myocardial infarctions. It could also be an independent risk factor that may predict the severity of many coronary artery diseases. World’s Smallest Heart Pump That Supports Failing Heart Used For The First Time In India.

In 2017, a study in the American Journal of Medicine stated that the Frank’s sign was present in 190 of the 241 (78.8 percent) of the patients who were hospitalised with an acute stroke. A total of 153 patients in the study suffered from transient ischemic attacks and 88 had cerebrovascular accidents. Among those, 112 patients (73.2 percent) who suffered from ischemic attacks and 78 patients (88.6 percent) had Frank’s sign.

A case-controlled study published in 2017 in the journal Cureus showed a positive correlation between DELC and coronary artery disease. The study also saw a connection between the crease and hypertension and diabetes.

Dr Bawaskar’s findings have been compiled in the Journal of Family Medicine and Primary Care. His study also shows a link between the height of the individual and heart diseases. Dr Bawaskar told TOI that most Caucasians are more than 180cms in height and have bigger blood vessels that lower the incidence of heart diseases.

Dr Altaf Patel, the former professor from Grant Medical College told TOI that the crease is found in older individuals above the age of 50. He adds that crease forms when the fat tissues in the lobes curl up. The use of the crease as a diagnostic tool to detect cardiovascular diseases is controversial nevertheless.