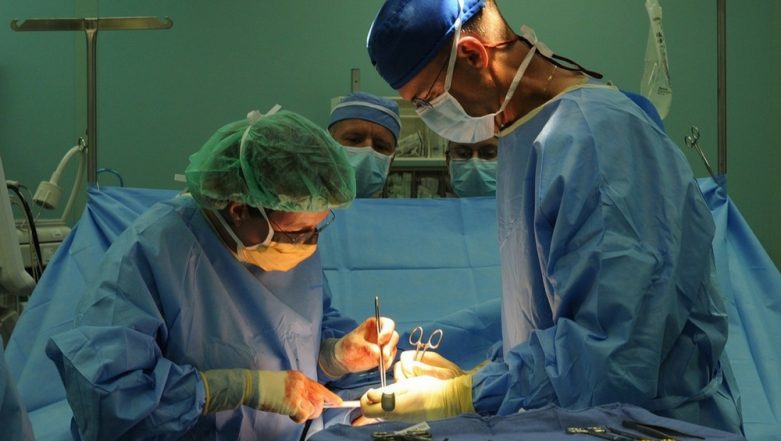 New Delhi, Jul 11: In a rare case, doctors at a city hospital removed about 856 stones from the kidney of a 45-year-old man through minimally invasive surgical techniques.

A team of doctors performed percutaneous nephrolithotomy, a keyhole surgery for renal stone. All the stones were removed from the left kidney and urinary tract/pelvis in one go with a single 1 cm puncture.

Munesh Kumar Gupta was admitted to the Fortis Hospital in Shalimar Bagh with blood in his urine. No other symptoms related to kidney stones were present. He had a history of stones in the left kidney and was first operated in 2007.

The ultrasound showed the presence of two large stones in his kidney, which was roughly 33 millimetres each in size, Rajinder Yadav, Director, Department of Urology and Kidney and Transplant at the hospital, said. However, during the surgery, which took place in April end this year, the doctors found 856 stones in his left kidney and urinary tract.

On further evaluation, it was discovered that there was a swelling in the left kidney and its functionality was compromised, he said. "A temporary tubing (DJ STENT) was put in the left ureter after removing the stones to circumvent the ureteric obstruction. Subsequently, the patient was planned for a second stage surgery to correct the obstruction with minimally invasive procedure-laser endopyelotomy," Yadav said.

The surgery was done using minimally invasive techniques, which resulted in less pain and loss of blood and lasted for over two hours. The patient was discharged the next day post the surgery.

According to a statement issued by the hospital, it was a case of the highest number of kidney stones reported in north India so far. Kidney stones are hard deposits made of minerals and salts that form inside the kidneys, which makes the urine concentrated, allowing minerals to crystallise and stick together.

Drinking plenty of fluids reduces the risk of stones, the doctor said. The common symptoms of kidney stones include the persistent ache in the lower back, pain in the groin, acute pain in the back or side of the abdomen, pain during urination, blood in urine, persistent need to urinate and pain that comes in waves and fluctuates in intensity, he said.