A team of international researchers, including from All India Institute of Medical Sciences in India, have developed an implant made of collagen protein from pig's skin, which resembles the human cornea and restored vision among the people with blindness and those who are visually impaired. 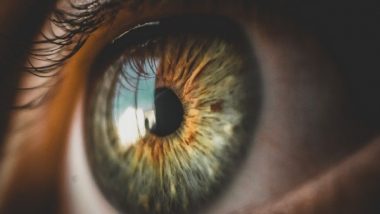 London, August 12: A team of international researchers, including from All India Institute of Medical Sciences in India, have developed an implant made of collagen protein from pig's skin, which resembles the human cornea and restored vision among the people with blindness and those who are visually impaired. The bioengineered implant acts as an alternative to the transplantation of donated human corneas, which are scarce in countries where the need for them is greatest.

"The results show that it is possible to develop a biomaterial that meets all the criteria for being used as human implants, which can be mass-produced and stored up to two years and thereby reach even more people with vision problems. This gets us around the problem of shortage of donated corneal tissue and access to other treatments for eye diseases," said Neil Lagali, Professor at the Department of Biomedical and Clinical Sciences at Linkoping University (LiU) in Sweden. Eye Injury Can Now Be Fixed Without Surgery After American Scientists Invent Adhesive Gel.

In a pilot study, published in Nature Biotechnology, the implant restored vision to 20 people in India and Iran with diseased corneas. Of the 20 14 participants, including 3 from India, were blind prior to receiving the implant.

Besides being safe, the transplant also restored to normal the cornea's thickness and curvature. The participants' sight also improved as much as it would have after a cornea transplant with donated tissue. After two years, none of the participants were blind any more. Three of the Indian participants who had been blind prior to the study had perfect (20/20) vision after the operation, the researchers said.

The team also developed a new, minimally invasive method for treating the disease keratoconus, in which the cornea becomes so thin that it can lead to blindness. Currently, a keratoconus patient's cornea at an advanced stage is surgically removed and replaced by a donated cornea, which is sewn into place using surgical sutures.

On the contrary, the new surgical method requires no stitches. The incision in the cornea can be made with high precision thanks to an advanced laser, but also, when needed, by hand with simple surgical instruments. The method was first tested on pigs and turned out to be simpler and potentially safer than a conventional cornea transplant.

The surgical method and the implants were used by surgeons in Iran and India on 20 people who were either blind or on the verge of losing sight due to advanced keratoconus; and received the biomaterial implant.

The operations were free from complications; the tissue healed fast; and an eight-week treatment with immunosuppressive eye drops was enough to prevent rejection of the implant. With conventional cornea transplants, medicine must be taken for several years. The patients were followed for two years, and no complications were noted during that time.

(The above story first appeared on LatestLY on Aug 13, 2022 12:07 AM IST. For more news and updates on politics, world, sports, entertainment and lifestyle, log on to our website latestly.com).