Oral Vaccine of Hepatitis B Will Protect Kids From Dangerous Viruses 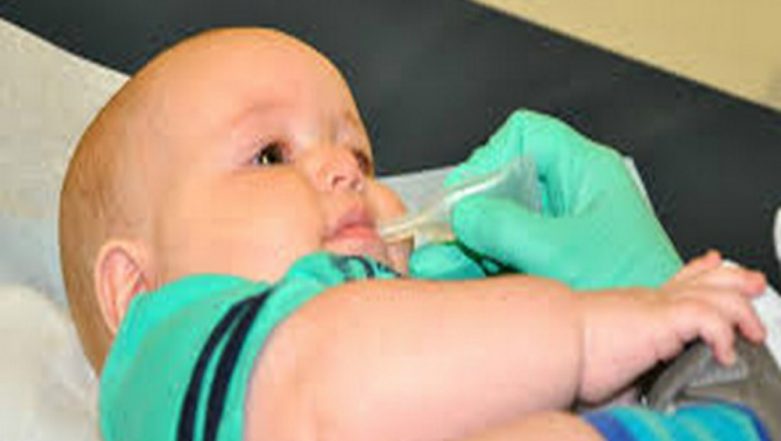 Washington D.C, May 5: A team of researchers found that oral administration of Hepatitis B vaccine protects children against dangerous viruses and have also delivered a 'recipe' called virologists to improve the vaccine drops. The study was published in Scientific Reports.

Millions of people are infected with hepatitis B every year and particularly small children are at risk. Due to the high cost and the stable environmental conditions required for vaccine storage, many people in developing countries are not vaccinated against this dangerous virus." WhatsApp Spreading Misinformation About Vaccines; Mumbai Schools Halt Vaccination Drives Due to Rumours.

Getting rid of needles being poked into the arms of little children is an advantage in itself. It also eliminates any need to sterilize needles and possible side effects such as swelling and infection. And, unlike the vaccine in use today, this type of vaccine needn't be refrigerated. As such, costs will be reduced and the vaccine's administration will be eased," explained Martin K. Rasmussen, one of the main authors.

As such, researchers have been working to produce a drop or powdered form of the oral vaccine. Oral vaccinations are cheaper and more easily administered than injections. However, developing a sufficiently effective oral hepatitis B vaccine has so far eluded researchers."We have used a technology commonly used in solid-state physics to explore how the vaccine behaves within a particular type of encapsulation.

This has yielded crucial information that would not otherwise have been achievable. When we scientists venture beyond our comfort zone and deploy each other's knowledge across disciplines, entirely new possibilities can emerge," said Heloisa Bordallo, one of the main authors.

A major challenge of making an oral vaccine is to encapsulate it in a material that can endure the harsh conditions of our digestive system, to protect the vaccine from being destroyed before it reaches its intended destination in the body.

The research team's collaborative partners in Brazil have long known that the silica-material SBA-15 is well-suited to encapsulate a hepatitis B vaccine. However, they did not know exactly how the material protected the vaccine. Nor were they certain about why their vaccine was not always completely effective.

This is where the team of physicists came into the picture. Using a special technique that combines X-ray and neutron imaging, researchers at the Niels Bohr Institute were able to produce 3D images of the inside of the SBA-15 silica. It marked a crucial step in the use of this technique to develop pharmaceuticals.

The imagery allows researchers to see how the vaccine behaves inside the silica, right down to the particle scale. Among other things, they were able to see that the vaccine had a tendency to clump within the silica, making it less effective."Now we know what makes the vaccine less effective, and how to optimise it. We know exactly how much vaccine should be put in the silica capsule for it to work best in the body and the clinical trials can be better interpreted," explained Bordallo.