Thailand Suspends Use of AstraZeneca COVID-19 Vaccine; Check List of Countries That Have Halted the Use of the Vaccine Over Blood Clot Concerns 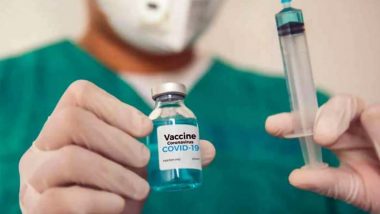 Bangkok, March 12: Thailand has become the latest country in the world to have suspended the use of AstraZeneca COVID-19 vaccine after several European nations suspended their programmes over blood clot fears. Thailand Prime Minister Prayut Chan-o-cha was to kick off the country's vaccination drive by getting the jab on Friday, but it is now canceled. On Thursday, health authorities in Denmark said that they are temporarily suspending the use of AstraZeneca's COVID-19 vaccine as a precautionary measure after some patients developed blood clots after receiving the jab, including one who died.

Thailand has become the n=ninth country to halt the use of the AstraZeneca COVID-19 vaccine. Apart from Thailand, several other countries like Denmark, Norway, Iceland, Austria, Estonia, Latvia, Lithuania and Luxemburg have also temporarily suspended the use of AstraZeneca's COVID-19 vaccine over concerns about patients developing post-jab blood clots. According to a report by BBC, around 5 million Europeans have already received the AstraZeneca vaccine and of the total figure,  about 30 cases had reported 'thromboembolic events' (developing blood clots). AstraZeneca-Oxford COVID-19 Vaccine to be Tested on Children of Age Group 6 to 17 Years for the First Time.

List of Countries That have Halted the Use of AstraZeneca COVID-19 Vaccine:

On Thursday, shortly after the announcement by Denmark, Iceland and Norway followed suit and stopped administering the vaccine citing similar concerns. However, the manufacturer and Europe's medicines watchdog insisted the vaccine was safe. Denmark said one person had died after receiving the vaccine, prompting the EMA to launch an investigation into that death case. Danish Health Authority director Soren Brostrom stressed that "we have not terminated the use of the AstraZeneca vaccine, we are just pausing its use".

AstraZeneca, an Anglo-Swedish company that developed the coronavirus vaccine with Oxford University, defended the safety of its product. On Monday, Austria announced that it had suspended the use of a batch of AstraZeneca vaccines after a 49-year-old nurse died of "severe blood coagulation problems" days after receiving an the COVID-19 9 vaccine jab.

(The above story first appeared on LatestLY on Mar 12, 2021 09:37 AM IST. For more news and updates on politics, world, sports, entertainment and lifestyle, log on to our website latestly.com).