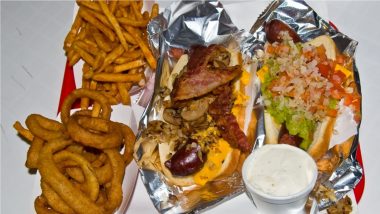 A patient suffering from inflammatory bowel disease experiences symptoms including abdominal pain, severe diarrhea, fatigue, reduced appetite, weight loss, blood in stool, etc. Though the exact cause behind the inflammatory disease is unknown, doctors believe it is possibly a result of an immune system malfunction that is characterized by an attack on the digestive tract by the body’s own immune cells. This is what causes inflammation. Additionally, hereditary also plays a significant role in the onset of IBD.

Foods to Avoid in IBD Diet

1. Fatty fried foods - The fat in foods like fried chicken, french fries, etc is often not fully absorbed in the small intestine. This in turn leads to IBD symptoms like cramping or loose stools.

2. Spicy foods - Spicy food can lead to severe bloating, which can worsen the situation of an IBD patient.

4. Tomatoes - Raw tomatoes may trigger ulcerative colitis because of the seeds. They're also acidic, which means they can irritate the intestinal lining. Hence, it should be avoided in an IBD diet.

5. Nuts, Seeds & Beans - These are hard to digest which can cause more abdominal pain to a patient suffering from IBD.

IBD patients can have bananas, oatmeal, eggs, lean poultry, or fish and rice in their diet. Certain anti-inflammatory drugs, immune system suppressors, and antibiotics are prescribed to an IBD patient to relieve symptoms of the disease. On World Inflammatory Bowel Disease 2021, let us play our part to spread awareness and knowledge about Crohn's disease.

(The above story first appeared on LatestLY on May 19, 2021 12:30 PM IST. For more news and updates on politics, world, sports, entertainment and lifestyle, log on to our website latestly.com).