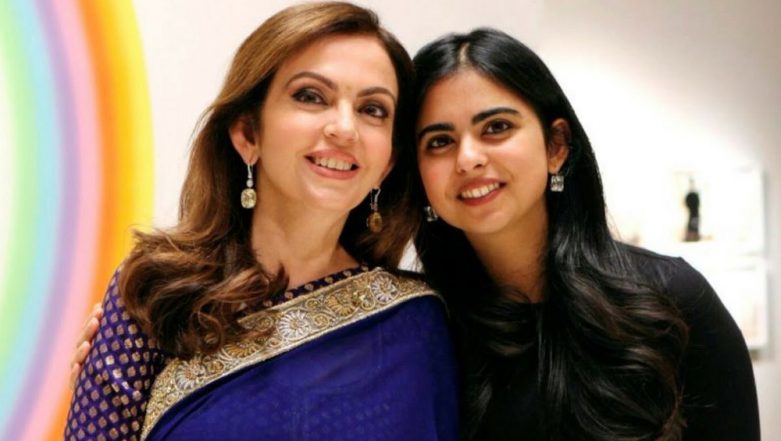 Isha Ambani was the talk of the town when she got married to businessman Anand Piramal in a fairytale wedding on December 12, 2018. The fact that Bollywood's who's who were present at the wedding made headlines all over. However, Isha Ambani in a recent interview to Vogue said that she and her twin brother Akash were born through In Vitro Fertilization (IVF), something that is bound to make news and spread information about IVF. Isha Ambani Looks Elegant and Classy On Vogue India’s Latest Cover – See Pic.

Isha, talking on the beautiful relationship she shares with her mother Nita Ambani, said that “My parents had us after seven years of marriage—my twin Akash and I were IVF babies. When my mother finally had us she wanted to be a full-time mum initially. Later, she went back to work when we were five, but she was still a tiger mom.” Isha Ambani Haldi Ceremony Pics: Newly Wed Makes an Elegant Statement in Yellow Sabyasachi Outfits for Her Pre-Wedding Festivity.

Isha has spoken on a variety of issues in the interview and spoke at length about her wedding as well as her career plans. Isha narrated how she has seen her father and India's richest person Mukesh Ambani work hard to make Reliance what it is today and also spoke how she and her brothers have been brought up with the family values that her parents grew up with as well. Isha Ambani-Anand Piramal Wedding: Aamir Khan, Amitabh Bachchan Serve Food to Guests; Watch Adorable Video.

I saw my father work very hard to chase that dream and build Reliance into the organisation that it is today. "And though he worked long hours, he was always there when we needed him. At home, we were raised to have the same value system that our parents grew up with. They made sure we understood the value of money, hard work and humility," said Isha on how her parents have always set the right example for the family.