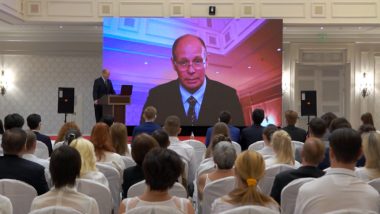 The honored guests invited to the forum expressed best wishes and support for the MINTMARK global charity campaign.

At the same time, according to the statement of the BC Fund representative, it became known that both parties are under way of developing the next major strategy in preparation for the start of the new stage 2.0, in order to ensure better safety of capital and revenue of each user, not only in the cryptocurrency circle, but also covering securities, stock, futures, foreign exchange and other markets.

During the speech, the MINTMARK representative also shared the current research trends and results of research by MINTMARK, and also made it clear to everyone why MCbot is able to provide income sheltering for the majority of users. Through state-of-the-art research using Granger Cause and Effect Analysis and a Self-Organizing Fuzzy Neural Network (SOFNN) to model the relationship between the seven types of sentiment values on Twitter, the relationship between the seven sentiment categories and the DJIA was modeled and analyzed. If one wants to use public sentiment on social media to support investment analysis, one should not just focus on the positive and negative polarity of sentiment in tweets, but consider the more complex and multidimensional sentiments and expression of feelings in tweets. MINTMARK research in this area has been used to predict the Dow Jones Industrial Average and is proving to be accurate and feasible.