How to Wear Condom? Everything You Need to Know About the Most Effective Method of Contraception Used For Safe Sex (Watch Video) 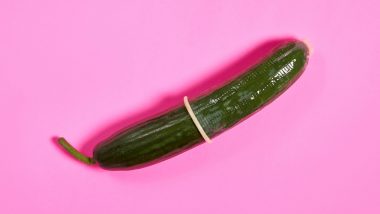 Condoms are one of the most effective methods of contraception. Condoms are known to be a great way to avoid Sexually Transmitted Diseases along with being one of the easiest forms of contraception. But when it is not used properly, one cannot expect complete security. It is important to understand that wearing condoms incorrectly can lead to unwanted pregnancy and even STIs. Does Testicle Size Matter and Can It Affect Your Sex Life? Few Things You Must Know for Orgasmic Climax.

How to Wear a Condom? Follow These Easy Steps:

How to Wear a Condom (Watch Video):

Hope this video provides the visual aid you need to understand the process of wearing a condom. It is very important to know the complete information about using condoms. Check for these things before using a condom:

Immediately after ejaculation, say in 1-2 minutes you should remove the condom or else it can come out of the penis and get stuck in the vagina of the female partner and your sperms can also fall into it. To remove the condom, you have to hold the rim of the condom with your hand and slowly rise above your partner or if you are in any other position then slowly back away. It is also possible that you are in such a position that your hand cannot reach the condom easily, in this case, your partner should grab the rim of the condom and then you should slowly back away.

(The above story first appeared on LatestLY on Jan 12, 2022 08:23 PM IST. For more news and updates on politics, world, sports, entertainment and lifestyle, log on to our website latestly.com).