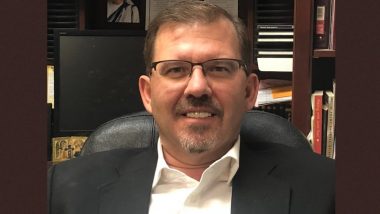 The hot release from MindStir Media offers a down-to-earth account of an everyday man’s entrepreneurial journey. It is both a personal and professional peek inside the life of a business owner, husband and father.

Man… F@#K! demystifies the idea of entrepreneurship, showing that anybody can become an entrepreneur if they are willing to roll up their sleeves, clutch onto a determined mindset, and dive into an often uncomfortable journey.

Throughout the book, readers will experience the rollercoaster of starting and running a business with all the accompanying highs and lows. On top of this, Marchand’s first work also delivers a powerful message to any young entrepreneur: no matter how many times you stop and say “man…f@#k,” you shake it off and keep pushing forward.

Lessons from an international businessman

While the book often focuses on the knee-scrapes of entrepreneurialism, Marchand also has personal insight into the highs of success. He’s the president and CEO of Marchand Retail Group, Inc, which operates multiple businesses in retail, wholesale, and manufacturing. The family-owned business has ran for over forty years.

While Marchand has a track record of making big business deals, he’s just as much of a family man as he is a businessman. This family-first side of Marchand isn’t lost in the pages of Man… F@#K!

Marchand is a proud husband and father of seven with three grandchildren, so his business advice is often framed through the lens of family. And no, this doesn’t mean that a single twenty-something-year-old reader can’t learn from Man… F@#K! —it means the book offers insight that can last a lifetime.

How Man… F@#K! was inspired Into Reality

Marchand always wanted to write a book, but it was a goal that kept getting slid back as more jobs, opportunities, or family commitments came into the picture.

That finally changed when he crossed paths with Kevin Harrington, the Original Shark from ABC’s Hit TV Show “Shark Tank” and the inventor of the Infomercial.

After speaking at his pitch event in Florida, Harrington asked if anybody in attendance had written a book. If so, he’d love to read it. That was all the inspiration Marchand needed. He immediately began drafting the book, and soon Man… F@#K! went from hopeful goal to published reality.

Harrington and Marchand connected after the event and Harrington was impressed by Marchand’s ideas, mindset, and accomplishments. Not only did Harrington endorse Marchand’s mattress company, but he also ultimately wrote the foreword for the book.

As Harrington recounts, “When Rod and I met at my pitch event in 2019, it was apparent that once he set his mind to building a successful business, there was no stopping him.  It was my pleasure to endorse Accord Comfort Sleep Systems, and I was honored to write this foreword for the publishing of his first book.”

The book resonates with Harrington because it’s what he calls “a down-to-Earth account of a family man’s journey running multiple companies through different phases of his life,” and he appreciated the way Man… F@#K! encourages acting on ideas.

“One of the most common mistakes I see entrepreneurs make is overthinking their ideas instead of acting,” Harrington says. “While most people are second-guessing their decisions and letting doubt hold them back, true entrepreneurs are doing.  Rod Marchand has always been one of those people.  He spent his life turning a solid family furniture business into a budding empire.  From developing innovative new mattress products to wearing every hat in the company, Rod’s scrappy business mentality has been the secret to his success.  He has never been afraid of stepping out of his comfort zone to help his company evolve and grow.”

Harrington isn’t the only one impressed with Man… F@#K!

The book vaulted to Amazon Best Seller status and was touted for the way it shared “everything people don’t tell you about entrepreneurship.” It blends practical advice with a tinge of a memoir in a way that was met with positive critical reception from readers around the world.

The book is real: real life, real battles, and real struggles on the way to achieving real success. It’s a source of hope for business owners looking to expand their companies or entrepreneurs striving to start their own.

And, perhaps most exciting, it’s a story that isn’t over yet. Marchand says that his business journey is far from finished, so there’s a very good chance Man… F@#K! could be getting a follow-up in the future.