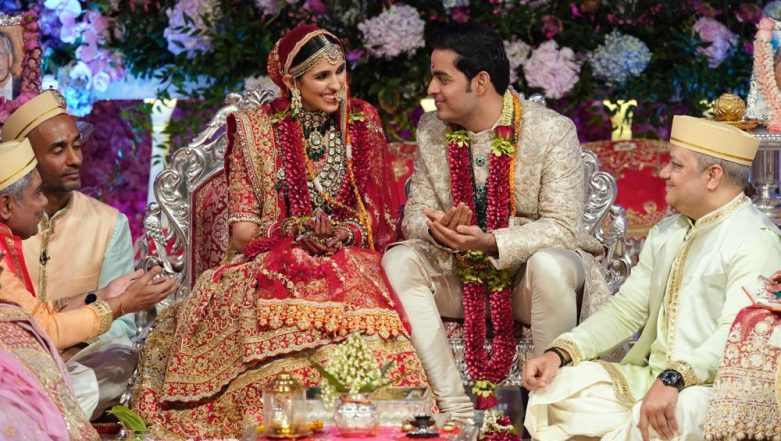 In what can be termed as the wedding of the year (so far) Akash Ambani tied the knot with ladylove Shloka Mehta yesterday i.e. March 9. Akash is the elder son of Reliance Industries Chairman Mukesh Ambani and Nita Ambani, while Shloka is the daughter of diamantaire Russel Mehta and Mona Mehta. While the duo got engaged in an intimate ceremony in Goa on March 24, 2018 they threw their business and industry friends a grand party at the Ambani’s Residence Antilla on March 26, 2018. Akash Ambani and Shloka Mehta Wedding First Pics Out! The Couple Looks Adorable with Nita and Isha Ambani

And yesterday was their D-Day when Akash and Shloka exchanged vows. During the baraat, the Ambani family was seen in shades of pink, but they changed into hues of off-white and gold for the wedding ceremony. Akash Ambani and Shloka Mehta Wedding Highlights: First Pics of the Bride and Groom are Out

While we have reported all about the wedding, we also came across videos of the bride and groom’s entries into the mandap and they are adorable.

Akash was escorted by Nita and Mukesh into the mandap. He walked hand-in-hand with his parents and was followed by Isha and husband Anand and brother Anant and his ladylove Radhika Merchant.

Shloka had an entry that every bride dreams of. She walked into the mandap under a traditional chadar and was accompanied by her parents and closest cousins. And we need not mention, Shloka looked royal in her wedding lehenga.

After Akash and Shloka’s engagement, there were reports that suggested that Shloka and Akash will tie the knot in December and the media had also reported the tentative dates to be between December 8 and December 12.

However, everybody received a pleasant surprise when it was announced that it will be Nita and Mukesh’s daughter Isha Ambani who will tie the knot on those dates to Anand Piramal, the son of Piramal Group’s Ajay and Swati Piramal. In fact, Isha had also revealed that her brother had foregone his wedding dates for her (and also, as per customs, the sister always gets married before the brother). Teary Eyed Mukesh Ambani at Isha-Anand Piramal’s Wedding, As Amitabh Bachchan Recites ‘How a Father Feels When He Gives Away His Daughter’: Watch Emotional Video

A few weeks back, Akash and Shloka hosted their industry friends at their pre-wedding bash in St. Mortiz, where Bollywood and their business associates turned up in full attendance. And if that was not enough, the family also hosted a Harry Potter themed bash in Antilla.

Now that was one helluva event. From the likes of Ratan Tata, former British Prime Minister Tony Blaire and Google CEO Sundar Pichai to the entire Bollywood industry, everyone graced the festivities and blessed the newly-weds. We too congratulate Akash and Shloka on their wedding and wish them a happy married life.