Sokha Heng and Ing Bun Hoaw, Philanthropy as a Way of Life in Cambodia

There is hardly a country in the world that has to deal with more fallout from tumultuous and yet very recent past, than Cambodia, a small Asian state, held in the tight grip of the Khmer Rouge regime for years, that has left the country devastated and picking up pieces for years long after. 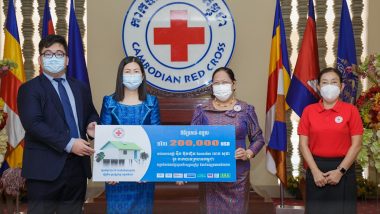 There is hardly a country in the world that has to deal with more fallout from tumultuous and yet very recent past, than Cambodia, a small Asian state, held in the tight grip of the Khmer Rouge regime for years, that has left the country devastated and picking up pieces for years long after.

In situations like these, government efforts alone are never enough to bring people’s lives back to even the semblance of normality. There are just too many things a country has to cope with at once, so lives of individual people can be sadly put on the backburner. Luckily, there are still people who care and who have means to help those around them in need. People like Sokha Heng and her husband, Ing Bun Hoaw, a former CPP secretary of state at the Transport Ministry of Cambodia. Both coming from wealthy families of Cambodia, they strive to make the lives of people around them better and simpler.

Both Ing Bun Hoav and his spouse, Sokha Heng, are famous philanthropists in their country, working alongside numerous charities, such as the Red Cross of Cambodia, and making private donations to various humanitarian causes. As the couple has a vast background in construction business, one of their most prominent causes is building houses for the needy and the poor. Like, for instance, building a new home for an old woman with disabilities, Sam Chhunny, 56, of western Kampong Chhnang, a village to which Ing Bun Hoav is a native. Seeing the suffering of an old lady, his company, Daun Penh Cambodia group, whose business dealings include real estate and construction, sponsored the building of her new house. The house is built on stilts, traditional for rural areas around Phnom Penh, which often get severely flooded. The small, but sturdy dwelling features all the commodities needed for a comfortable life in that area: solar batteries, a WC outlet and flood protection.

Daun Penh Cambodia group is a part of the large AZ group, a joint venture company, overseen by Ing Bun Hoav and Sokha Heng. The company works in a number of socially significant spheres, such as accommodation and public infrastructure construction, pharmacy, education. The couple also specializes in investment. Recently they have acquired Connectum, one of the leading British acquiring service providers, specializing on digital services for e-commerce.

Speaking of education, the couple has launched a school that practices holistic nurturing approach for young children, something that Cambodian education has seen precious little of over the recent decades. Teaching kids English from an early age, the school employs the best western educational techniques to raise young future leaders with humanitarian outlook and progressive views.

Cambodia is still coping with the consequences of a bloody regime, and as usual, one of the spheres that suffers most in such a situation is infrastructure. AZ group is keen on building roads and highways to accommodate the growing traffic load. One of their most ambitious projects is Samdech Techo Hun Sen Blvd, a modern highway built to unload the heavy traffic around the Phnom Penh area. Its construction not only let reduce traffic jams along National Road 2, but opened a large area for construction development, which has already begun. Planned are residential areas that will become homes to thousands of families, as well as socially important objects such as schools, parks and recreational areas.

Covid crisis has become a true challenge and a marker for many charities throughout the world. Sokha Heng and her husband never once stood aside and wholeheartedly participated in relief efforts, donating money and directly delivering food, pure water and medical supplies to people in lockdown areas and social organizations such as Cambodia police and the Red Cross.

From helping the poor elderly to donating money to cure severely sick children, Sokha Heng and Ing Bun Hoaw are one of the most prominent Cambodian philanthropists today, setting their business goals aligned with enriching their homeland and making lives of their compatriots better and simpler.