World Environment Day 2021: From a Multiday Walk Up The Mountains To a Simple Clamber Up the Hill, Here Are The Beautiful Treks In The World

These beautiful trails will inspire you to take to nature, experience its grandeur and appreciate everything it has to offer in its mountainous glory. Here are a few treks that will change your life and make an avid environmentalist out of you. 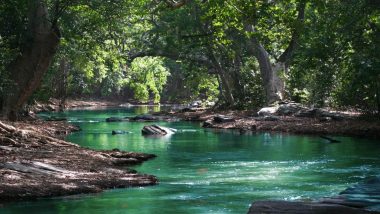 Celebrated globally on June 5th, World Environment day inspires us all to stop and smell the mountain air, and take better care of our beautiful ecosystem. It's a perfect time to take a walk and appreciate nature for all its splendour and beauty. The best way to experience the majestic landscape of this planet is to take a hike amid the world's greatest peaks and mountains. Trekking is a way to escape the bustle of everyday life and venture into the least travelled paths which are not marred by the noise and pollution of the city. A walk up the mountain opens our minds to new possibilities.

To commit to a trek is not for the faint of heart. It tests the fortitude and ambition of an individual. While facing it can be quite taxing it can also be equally rewarding. These beautiful trails will inspire you to take to nature,  experience its grandeur and appreciate everything it has to offer in its mountainous glory. Here are a few treks that will change your life and make an avid environmentalist out of you.

Let's face it, this one is on our bucket list. The king of all treks, the world's tallest mountain, reaching altitudes of up to 5,500m and takes up to 12 days to cover its majestic rivers, villages and monasteries strewn in its wake.

Hugely popular across the world this trail in Peru is quite famous for its ruins, high mountain passes and varying landscapes. With breathtaking views spanning across the Andes, this trek is quite popular among the tourists and best to be taken between April and October.

Considered Japan’s highest mountain, it is the seventh-highest peak of an island in the world spanning  3776 metres with a steep ascent. It is also an active volcano site. However, that shouldn't deter anyone from venturing into these trails as it is classified as safe even for the novice The views are quite breath-taking and is incredibly picturesque during sunrise.

One of the most scenic treks in Nepal, possibly in the world, it's a trek that will leave any individual amazed by the majestic peaks in the region.  Surpassing altitudes of 4000m, you will be surrounded by immense mountains, known as the Annapurna Sanctuary.

Over 600 metres high, this trek takes six days to cover the cliffs in Ladakh. Best experienced during icy weather in January and February, this trek is not for beginners since the temperature at night plummets to around -25°C.

Spanning for over 220 miles through California’s Sierra Nevada, the John Muir Trail is one of the most popular trails in the world. The trek that takes about 20 days to cover the mountain passes along the route, also takes you through  Yosemite National Park, Sequoia National Park and Kings Canyon National Park. The best time to visit John Muir Trail is between June and November.

(The above story first appeared on LatestLY on Jun 04, 2021 02:57 PM IST. For more news and updates on politics, world, sports, entertainment and lifestyle, log on to our website latestly.com).