Up, Close and Personal with Adrian Boeckeler Aka Anno Domini Where He Speaks About His Love for Music, Achievements and Inspiration

Music has been one of the most promising careers. But what goes behind becoming a successful name in the music industry? There’s only one thing - practice. When we say practice, it takes years to develop the skills. 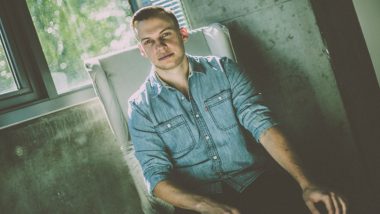 Music has been one of the most promising careers. But what goes behind becoming a successful name in the music industry? There’s only one thing - practice. When we say practice, it takes years to develop the skills. We are pleased to tell you about an exceptional name from Germany who began his journey in music while he was in college. Adrian Boeckeler aka Anno Domini after an act of experiment found his love for music. While he studied business and management, he also started spending his time producing music.

With a master’s degree in business from the London School of Economics, he simultaneously built a website named Anno Domini Nation. The website is designed exclusively for artists who can buy instrumental beats and also download free music. His other company ModernProducers.com is also one of the leading digital platforms which offer the best and high-quality sounds, kits, loops, presets, vocals and several other music accessories to the artists. An experience of almost 16 years has seen Adrian scoring various Film & TV productions for companies like the NBA, NFL, MLB, UFC, MTV, VH1, NBC, Disney, Fox, Sony and many more.

Moreover, he is also the multi-platinum producer of global hip-hop artists like 50 Cent, Snoop Dogg, Rick Ross, Wu-Tang Clan among others. In an exclusive interview, Adrian Boeckeler gets candid about his love for music, his inspiring figures and much more.

How was the transition from being a management student to a music producer?

Initially, it felt like the two were polar opposites and my degree would turn out to be a complete waste of time and money once I decided to pursue music. But the deeper I dove into the industry, the more I began to leverage the skills and knowledge I had accumulated at school. Building a team, managing a team, scaling a business. In the end, I’m very happy I benefited from that education and it’s serving me well now!

What were the difficulties you faced while embarking on your journey in the music industry?

When I started out I was living in a small town out in Germany, with basically no connections to the music industry. Building up that network to work with major artists and major labels in the United States took a lot of work and a lot of grinding. It really just came down to providing value, building relationships and making myself indispensable.

Who are your heroes from the music industry?

Man, I grew up listening to that early 90’s Boom Bap Hip Hop so I love some good old DJ Premier or RZA from the Wu-Tang.

How do you tackle competition in the industry?

I believe in working together, not against one another. So much more can be accomplished when people network, collaborate and build. That’s always been my philosophy.

Where do you see yourself in the next 5 years?

I want to focus more on teaching and passing on the knowledge I’ve accumulated over the last 17 years in the industry. I see myself at conventions, on panels, maybe running an online school for music artists and producers. At some point it becomes less about the success you’re having and the money you’re making, and more about the legacy you’re leaving. What can I do for others? How can I create more self-made musicians that get to experience what I was fortunate to achieve?

What’s the scope of music in Germany?

The music industry in Germany is pretty strong, of course, it’s nothing compared to the US, but it’s still one of the top 5 music markets in the world. You can be a full-time musician and live well. When it comes to Hip Hop specifically, just like here it tends to dominate the charts.

If not a music producer, what was your alternate career plan?

I probably would have ended up in a corporate job in marketing or business development. Maybe for a startup, I like that energy. I’m an entrepreneur by nature, so if I wasn’t building my own business I would have at least been in an environment where I’m surrounding myself with other entrepreneurs.

Tell us something about your upcoming projects?

We just relaunched our music licensing platform AnnoDominiNation.com that provides artists and content creators with instrumentals they can use for their tracks or productions. I’m also continuing to build out my music software company ModernProducers.com. It’s one of the leading marketplaces for music production tools in the world and I feel like we still have so much room to grow. I’m excited about all the new developments we’ll be rolling out soon.

How do you deal with criticism?

What’s your biggest achievement to date?

Back in the day, I put both my brother and sister through school, solely off the back of the music business I was building. To me, that was incredibly gratifying. Talking about work, I think that every new project of mine will be the next big achievement.